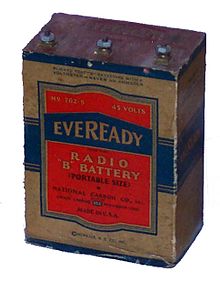 An anode battery is a dry battery in which a comparatively high voltage is made available for the anode power supply of the electron tubes by connecting many galvanic cells in series . A heating battery is a battery for the voltage supply of the filaments or hot cathodes of the electron tubes with a voltage range of a few volts . These two energy stores were used until the 1920s to supply stationary tube radios with the required operating voltages, and until the 1950s for portable receivers.

Anode batteries and heating batteries are obsolete and are no longer used today.

The anode battery, also known as “B battery” or “HT (High Tension)”, has around 70 to 100 galvanic cells connected in series. This results in the high DC voltage of 100 V to 150 V required to operate electron tubes . The voltages 60, 90, and 120 V were common. The voltage could be tapped at the correspondingly labeled sockets of the anode battery. The service life of such a battery was several 100 hours with headphones, and correspondingly less with loudspeaker reception.

Often these anode batteries also had further taps in order to generate the grid prestress that is essential for setting the operating point .

The heating batteries, also known as “A-battery” or “LT (Low Tension)”, had voltages of 2, 4 or 1.5 V, and corresponding tube series were developed, such as the A series with 4 V , the K series for 2 V and later the D series with 1.4 V. The voltage of 4 V was partially retained in later tubes that were heated from a transformer. With the advent of tube- equipped car radios , the newer tube types with a heating voltage of 6.3 volts were developed.

Later there were also mains-fed power supplies. The DC voltage network, which was widespread at the beginning, was directly suitable for this purpose; in the AC voltage network, a so-called network anode , a rectifier circuit with tube diodes, was used . However, up to the introduction of indirectly heated cathodes or series heating (see all-current device ), the tube heaters were still fed by a battery, the heating battery . With AC mains operation, the mains hum caused by directly heated cathodes was also avoided.

Transportable tube radios or weather balloon probes still required an anode and a heating battery. For this purpose, the battery tubes were developed, which require a lower power consumption from the voltage sources with a correspondingly reduced power.

In radiochemistry and nuclear physics, anode batteries were also used to supply voltage to ionization chambers and counter tubes until the middle of the 20th century . For a counter tube voltage of 1500 volts z. B. ten batteries of 150 volts each can be connected in series.