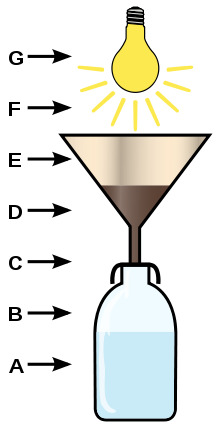 Berlese invented the Berles funnel, a widely used device for automatically reading out soil insects and other soil organisms .

A funnel (E) contains the soil sample (D). The heat (F) of a light bulb (G) heats the soil sample. The bottom organisms try to escape the dehydration and the light and migrate downwards. Finally, they fall through a filter (C) into the collecting container (B) filled with a preservation liquid (A).

The storage of the soil substrate sample (D) is only shown schematically in the picture on the left: In general, the sample is not crumbled and poured into the funnel, but rather placed as a whole on a sieve base, which is intended to reduce the proportion of soil substrate in the collecting vessel (B).

This type of extraction is usually referred to as a Berlese or Tullgren funnel after the first description. In 1905 Berlese described the funnel method with heating through a warm water jacket , Albert Tullgren introduced heating from above with an incandescent lamp in 1918. Since expulsion under an incandescent lamp has largely prevailed, the apparatus is now known as the Berlese-Tullgren funnel.

According to Berlese, a type of water-containing embedding media for the microscopic examination of small arthropods is named, which, apart from the usual proportion of chloral hydrate and gum arabic , is characterized by the lack of glycerine , which is replaced here by acetic acid and glucose . According to more recent studies, however, Berlese did not use this type, but a glycerine-containing medium according to Hoyer for his microscopic preparations .