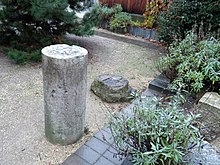 The open space used as an archaeological garden was to be built over in 1991 and an underground car park built underneath. During extensive excavations between 1992 and 1996, foundations and finds of a large Roman building (probably thermal baths) were found on the site. On July 1, 2010, the Augsburg city council decided to keep the site. Together with the Langner Foundation , the city of Augsburg was able to raise funds for keeping and designing the archaeological garden and bought the site from the Catholic Church.

The preparatory excavations took place on an area of ​​around 2,000 m². The archaeological park has an area of ​​approximately 400 m². 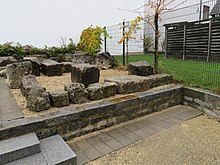 The rear part of the Archaeological Garden

The garden in Äußere Pfaffengässchen was opened on July 8, 2011.

Most of the facility is without a roof. On the slightly raised rear area, visitors can get a Mediterranean impression in summer due to the open location and the plants. The example buildings hypocaust heating and infill as well as the preserved hearth are covered.

There is a public drinking fountain in the complex.