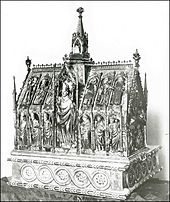 Old design, still without a cross in the middle

Side view before the robbery

The Arqueta de Sant Martirià ( Catalan for 'The Shrine of Saint Martirianus') is a 15th century Gothic reliquary that houses the relics of Saint Martirià in the monastery of Sant Esteve de Banyoles in the Spanish province of Girona .

It is one of the most important works of the Catalan workshop of Francesc Artau. The shrine was made in Girona between 1413 and 1453. Francesc Artau started the work which was completed by his son Francesc Artau II.

The cypress wood shrine has the shape of a Gothic church with a rectangular base of 65 × 32.5 cm with a gable roof. The entire surface is covered with chased silver and gold-plated. The shrine shows 28 colored relief figures. At 71 cm, the central cross is the highest point of the shrine.

On the two sides 61 × 29.2 cm there are two reliefs with a scene of the martyrdom of St. Martirià and a Madonna with angels.

On January 11, 1980, some figures were dismantled and stolen during a church robbery. The diocese of Girona made numerous attempts to get the pieces back. In 1997 some missing parts could be returned with the help of a Dutch collector. All the reliefs were only returned to their original state in October 2009 when the reliquary in Madrid was restored. The restoration was carried out by the Spanish Ministry of Culture together with the Diocese of Girona. After restoration, the shrine was returned to the Banyoles Monasteri de Sant Esteve on October 16, 2010, and is kept in a room with new security measures.

The Festa de Sant Martirià takes place every October in honor of the saint in Banyoles . It lasts from Saturday to Monday inclusive.