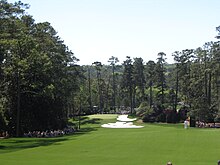 The Augusta National Golf Club in Augusta , Georgia , USA is a famous American Golf Club . He organizes the Masters tournament every year on the club's own golf course .

For the history of the golf course see Augusta National . The golf club was founded in December 1932 and has developed over time into a very exclusive, private golf club.

The “Green Jacket” traditionally given to the winner at the Masters, was first introduced in 1937. Club members should wear it during the Masters tournament so that viewers could quickly identify a contact if they had a question. The winner of the tournament has received a green jacket since 1949, which in this case does not mean regular club membership with all rights and obligations.

In 1958 an additional par-3 course was created. In 1990 the first black American was accepted as a member.

There is practically no official information about the golf club, especially the members are consistently shielded. However, it is considered refuted that all or at least all of the Republican US presidents were or are members. Only the passionate golfer Dwight D. Eisenhower , after whom some landmarks on the course are named, is safe. In a membership list published by USA Today in 2002 , however, there are well-known politicians ( George Shultz ) and many prominent entrepreneurs and managers ( Jack Welch , Warren Buffett , William C. Ford , Lou Gerstner ). Allegedly, membership was also offered to the Mexican-born golf champion Lee Trevino , who declined on the grounds that he felt uncomfortable in a white, southern organization. In any case, he turned down the invitation to the Masters in 1970 and 1971.

At any given time, the Augusta National Golf Club is said to have approximately 300 members who pay between $ 25,000 and $ 50,000 annually for the privilege. Nothing is known of an official admission or application process; it is generally assumed that membership can only be achieved through an invitation from the club. A legend that is often quoted says that such an invitation is not sent through a phone call or letter, but rather by sending the invoice for the membership fee without comment. If the recipient pays, he is admitted for life, but he does not receive an official document about it. If he does not pay, he will not receive any further bills because the club will assume that there is no interest.

Although women are allowed to play on the golf course as guests of a member and, according to an official announcement by Chairman Johnson, there is no internal club rule prohibiting the admission of women, no woman was actually invited to become a member until 2012. Martha Burk, chairwoman of the women's rights organization NOW , took this as an opportunity in 2002 to launch a national protest campaign against the club's policies, which she regarded as discriminatory. She wrote open letters to prominent members, particularly politicians, who stood for re-election, and urged them to take a position on the practice. She also organized a protest rally during Masters Week 2003 and put pressure on the tournament's advertising partners.

The club's position was represented by Chairman William "Hootie" Johnson. He stated that the Augusta National Golf Club was a purely private organization that had the right to decide who to accept as a member. There are no fundamental concerns against women, but the club does not allow itself to be blackmailed by outsiders. In the end, public pressure led to a withdrawal of the sponsors of the Masters, so that the TV broadcast ran without commercial breaks in 2003 and 2004. The club was able to get over the considerable decline in income, but the women's rights activists wrote this as a success on the flag.

On August 20, 2012, the ANGC accepted two women as members for the first time in its history. These are former US Secretary of State Condoleezza Rice and entrepreneur Darla Moore .

The "Magnolia Lane" is the approximately 300 meter long street that connects the gate with the clubhouse. It got its name from 61 large magnolias (laid out in the 1850s) that line it on the left and right. At the end of Magnolia Lane is the "Founder's Circle" with memorial plaques for the two founders Bobby Jones and Clifford Roberts. On the other side of the clubhouse is the "Big Oak Tree", an approximately 150-year-old oak tree that is a popular meeting place during the Masters tournament. The “Crow's Nest” is located in the clubhouse itself, a room directly under the dome that can accommodate up to five guests. Participating amateurs are allowed to stay here during the Masters.