Australian Motor Industries ( AMI for short ) was an Australian automobile manufacturer with headquarters in Port Melbourne . He produced and imported automobiles under licenses from foreign manufacturers, including Daimler-Benz , AMC and Toyota .

The company became a wholly-owned subsidiary of Toyota in 1987 and henceforth operated as Toyota Motor Corporation Australia , which produced automobiles until 2017.

The company's origins can be traced back to 1926 with a company called Eclipse Motors that imported automobiles. In 1949, Standard Motor Company (Australia) Limited was founded with the assistance of the local Standard agency to manufacture Standard and Triumph passenger cars and commercial vehicles .

Ferguson and Massey-Ferguson tractors were also manufactured and sold through the British Farm Equipment distribution company .

The standard models in Australia were partly different from their British counterparts. In addition, were Ute finishings various models such. B. Mayflower and Vanguard manufactured.

The Eight and Cadet series were the most successful standard models in Australia with 28,147 registered vehicles.

In the case of the Vanguard , the hood of which was fitted with a kangaroo in Australia and which was temporarily sold as a Spacemaster, some model update measures were only implemented with a delay. From 1960 to 1966 the Vanguard 6 registered a total of 4648 vehicles, of which 1968 were utility vehicles.

The most successful Triumph model was - from 1964 to 1978 - with 22,942 registrations the 2000/2500 , which was produced by AMi until 1978. According to another source, the Triumph production at AMI ended in 1976 and was then continued by Leyland Australia until 1978 with external service providers.

In 1958, Standard Australia reached an agreement with Mercedes-Benz, which was looking for production capacities in Australia. Together they founded Mercedes-Benz Australia Pty Ltd (MBAU) in July 1958, in which Standard held two-thirds and Daimler-Benz one-third (which was taken over in full by Daimler-Benz just a few years later). In 1959, Standard changed its name to Australian Motor Industries (AMI). On February 12, 1959, the first vehicle to be manufactured was a Mercedes-Benz 220S . From 1959 to 1965, depending on the source, 6,390 to around 7,500 vehicles were produced.

From 1960 onwards, AMI also imported and assembled American Motors Corporation vehicles . These were sold as ramblers.

The numbers of the various models manufactured until 1978 remained relatively small. The AMI Rambler Gremlin remained a one-off. 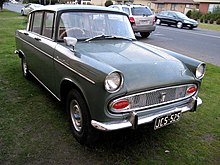 In April 1963, AMI started production of the Toyota Tiara . With Toyota's increasing popularity in the 1960s, AMI also began producing the Crown , Corona and Corolla models .

In 1968 Toyota acquired a 10% stake in AMI, which was increased to 50% in 1971 through the acquisition of British Leyland. In addition, in 1974 AMI opened a component plant that was built together with Nippondenso .

In 1987 the remaining shares of other Australian Motor Industries were bought by Toyota ; the company was renamed and has been called Toyota Motor Corporation Australia since then.