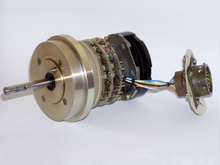 The A zimut C hange P ulses, ACP for short , transmit the azimuth information from the antenna turntable to the viewing devices in a radar device. An encoder is mechanically attached to the antenna turntable, the rotor of which rotates rigidly with the antenna and encodes the directional information . Serial pulses are generated synchronously with the rotation , which are counted in the display device or in the radar signal processor. When traveling in the north direction, a reference pulse is generated on a second line, which is called NRP (North Reference Pulse) or ARP (Azimuth Reference Pulse).

According to the binary counter, a number of 4096 (12-bit counter) up to 16384 pulses (14-bit counter) are generated for each full rotation of the antenna through 360 °. The accuracy lies

Very high demands are made on the encoder in terms of accuracy. They are mostly optical systems that scan overlapping line patterns on a thin, round pane of glass with a light barrier.

A similar working principle, but mostly with fewer pulses per revolution, is used in electronics by means of incremental encoders . The forerunners of this method of transmitting lateral angle information were realized by servo systems with encoders or resolvers .