Incremental encoders (in contrast to absolute encoders ) may have to be referenced after switching on , since changes to the position are not recorded when the device is switched off.

Incremental encoder as rotary adjuster; next to it the removed control button

Incremental encoders can work with sliding contacts, photoelectrically or magnetically. At the output they always provide two signals that are 90 degrees out of phase with each other (see section Signal evaluation ), which can be used to determine the direction and angle of rotation.

Incremental encoders with sliding contacts basically work like a rotary switch. Usual resolutions are around 32 positions per revolution. The disadvantage of the inexpensive solution with sliding contacts is mechanical wear. Mechanical incremental encoders are therefore only used for occasional actuation, e.g. for digital rotary knobs. If necessary, the contacts must be debounced electronically or by software . Often, a push button contact is also implemented via axial actuation, for example for switching on and off, confirming an input, etc.

The advantage is the low quiescent current consumption, which can be zero with a suitable design of the detent positions and is therefore suitable for battery-operated remote controls .

Tape in an inkjet printer used to determine the position of the printhead.

A supply current in the milliampere range is required to illuminate or transilluminate the grid, so that optical methods are less used in battery-operated devices.

Between the light-emitting diode and two slightly offset photodetectors there is a slotted disc. If this disk now rotates, the two photodetectors are illuminated alternately. The receiver uses these two output signals to determine the direction of rotation and counts the pulses. High-quality measuring systems use four sensors, each of which is connected in antiparallel in pairs to obtain a defined zero crossing and thus to compensate for drift and aging phenomena.

In multi-field scanning, a light beam that is generated by a light source (usually an infrared light - emitting diode ) is directed through a condenser , a scanning plate with lines and an aperture ( measuring standard) onto a photo-optical component (usually a phototransistor ). The scanning plate has a grating with a slightly different pitch so that the moiré effect on the photodetectors creates an enlarged image of the pitch. The simplest versions, such as those used in computer mice , for example, do without a condenser and scanning plate.

Another measuring principle is single-field scanning using the incident light method . The light beam is directed through the condenser and a scanning plate, which is equipped with two nested phase gratings , onto a measuring standard. The light beam is then reflected on the measuring standard and returned through the diffraction grating. This again results in four phase-shifted images of the scanning plate, which are evaluated as in multi-field scanning. The method can be used with linear scales because it tolerates a slight waviness of the measuring standard and is also insensitive to slight local contamination.

With this measuring principle, the diffraction phenomenon on a grating is used to generate a measuring signal. This method is used for high-precision incremental linear measuring systems. For this purpose, the light beam is passed through a condenser onto a measuring standard, reflected there and returned to the photoelectric sensors by the condenser. The transparent scanning plate with a phase grating ensures that three diffracted beam components (diffraction order −1, 0, +1) are generated. After the reflection on the measuring standard, which also has a phase grating, the scanning plate is passed again by the beams, the zeroth diffraction order being canceled out. Then the ± 1. Diffraction order mapped onto three photo elements in such a way that they generate a signal offset by 120 °. These three signals are then converted into an industrial-grade 2-signal form in subsequent electronics.

Visualization of the magnetic structure of a magnetic tape.

In an incremental measuring system with magnetic scanning, the measuring standard consists of a hard magnetic carrier, in which a graduation has been written by magnetization (a pole wheel or magnetic tape). Typical magnetic graduation periods are between 0.5 mm and 5 mm, but larger gradations can also be implemented and used as incremental tracks. The reading of the magnetic coding can be done by Hall elements or magnetoresistive sensors. With the two different technologies, a contactless reading of the magnetization can be realized. Magnetic scanning is used when the measuring system cannot be encapsulated with tolerable effort. It can be made insensitive to liquids and dirt. Ferromagnetic foreign bodies in the gap between the sensor and the material measure can disrupt the measuring principle. The negative influence of external magnetic interference fields depends on the selected sensor technology, sensor design and magnetic field strength of the measuring standard.

Only a small quiescent current in the microampere range is required to operate the read amplifier, so this method is well suited for battery-operated devices with automatic shutdown, such as digital calipers .

Another possibility is the scanning of a toothing made of non-magnetized ferromagnetic material (e.g. gear wheels or racks made of iron) by means of one or more induction coils charged with direct current. Either a special target wheel is mounted or existing construction elements are used as a measuring standard. The scanning head has an iron core that matches the teeth. Two further coils (or field plates or GMR sensors ) register the change in the magnetic field, which is evaluated according to polarity and phase position. The accuracy depends on the pitch and the diameter of the gear, but is generally lower than with optical encoders. Passive induction sensors are used at higher speeds and in a dirty environment .

If the information about the direction of rotation is not required, for example because only the speed is of interest, it is sufficient to evaluate a single signal. In this case, one often speaks of a speedometer signal or an FG or F.G. signal (for frequency generator ). The sensor principles presented above are applied in a correspondingly simplified manner. The frequency of the speedometer signal is proportional to the ( angular ) speed .

Applications are, for example, in control technology for regulating a speed ( capstan of a tape recorder ) or for standstill detection ( fan control signal). 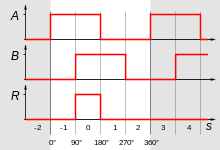 Square wave signals (A / B) and reference pulse (R)

Sine (A), cosine signal (B) and reference pulse (R)

Special AB counters determine the direction from these two signals and count the pulses. This allows direct conclusions to be drawn about the measuring standard (path or angle). The speed and direction can be determined from the old and the new state and the time between the state changes of A and B. With the so-called 4-fold resolution , the counter is changed with every edge (see numbers in the figure on the right). On the other hand, if you only count each period (4 steps), a hysteresis can be achieved in a simple manner . This is often used with digital rotary knobs. A resolution higher than 4 times is not possible when evaluating square-wave signals.

If the incremental encoder is exactly on the edge of an edge, additional impulses can occur due to the smallest vibrations or other effects (key bouncing, electromagnetic interference). So-called step tables eliminate errors caused by multiple impulses at the switching times: Assume that B stands at 1 and A changes from 1 to 0 and bounces: A mem and B mem should be the stored values ​​before a new edge. When changing from A to 0 for the first time, A mem = 0 and B mem = 1 are then saved. If A now changes back to 1, no pulse is counted because the current B = B mem . As long as B has not changed, edges at A may no longer be counted. In short: the logic implements the a priori knowledge that after a change from A, a change from B must come first (and vice versa). This also applies to reversing the direction of rotation.

In the case of sensors that generate a sinusoidal signal, the measured signal can be interpolated , which allows a significant increase in resolution. Depending on the design, this interpolation already takes place in the sensor unit, since the distance between the sensor and the evaluation circuit should be as small as possible in order to avoid the interception of disturbances by the connecting line.

If the incremental encoder is used in a servomotor, it usually has additional tracks for commutation signals from which absolute angles can be determined immediately after switching on. Analogously, they can consist of sine or cosine signals offset by 90 ° (a quarter turn of the motor shaft) (so-called C / D track or Z1 track) or of partial circles for block commutation .

After switching on the power supply, the incremental encoder only measures changes compared to the switch-on position. For many applications, however, knowledge of the absolute position is required. This is why most angle encoders issue a reference pulse (zero pulse, reference mark) once per revolution on a third output. After switching on, the encoder must be rotated until the reference pulse has been recognized. The absolute angle is then available after one revolution at the latest.

There are several variants for incremental length measuring systems: