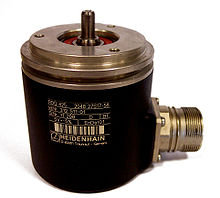 Absolute encoders are length or angle encoders that are used as position encoders on machine tools , in handling and automation technology, and on measuring and testing equipment. The absolute measured value is available without referencing immediately after switching on.

Functional principle of an absolute encoder

Absolute encoders output the position information in the form of a digital numerical value. Since this numerical value is unambiguous over the entire resolution range of the absolute encoder, no initial reference run such as B. required for incremental encoders . The transmission of the absolute values ​​from the encoder to the control or to the servo drive is partly serial. Special protocols such as the BiSS interface , SSI , EnDat (Heidenhain) or Hiperface (Sick-Stegmann, subsidiary of Sick AG ) are used. In addition to the current position value, other data can also be transferred. These can contain the current temperature values ​​of the encoder or the electrical data of the servomotor on which the encoder is mounted (so-called electronic rating plate).

In addition to the serial transmission, which is typically done with the BiSS interface or the SSI interface ( synchronous serial interface ), more and more absolute encoders with various bus systems have been available on the market in the last few decades . The most important bus systems for data transmission of absolute single and multi-turn information are:

When using an ordinary binary code, the problem arises that several bits often change at the same time. When changing from 3 (binary 011) to 4 (binary 100), e.g. B. three bits at a time. This can lead to incorrect values ​​at the respective position if some bits of the old position are still being read and some bits are already registering the next position.

To prevent this, encodings are used in which adjacent positions only differ in a single bit. The gray code is the most common example of this. This is also a binary code that can be used with any length, with as many numbers as can be represented with normal binary code. In order to expand a Gray code with an additional bit, the previous code is mirrored in the new area. In addition, the bit that has been added is set to 1 there.

In addition to the incremental track, the vernier method uses a second track that has a slightly different division, so that there is a period difference in the entire measuring range. The incremental tracks deliver sinusoidal output signals that result in a high resolution through interpolation (20 times in the figure). The absolute position is calculated from the offset of the two incremental tracks (A, B) and (C, D).

Excerpt from the pseudo-random sequence of the RESOLUTE ™ optical absolute encoder from Renishaw.

The sequentially applied pseudo-random sequence manages with just one code track ( pseudo random code ). Here, the position information is arranged in the direction of movement. Special feedback shift registers generate such codes and can also decode them. Decoding with tables is faster but requires a lot of memory. To increase the resolution, the absolute code track is often supplemented by an additional incremental track. In the second picture on the right the absolute code is combined with the incremental track in which lines have been left out. A period there is 30 µm, the measurement accuracy ± 1 µm, the resolution 0.1 µm - 1 nm. 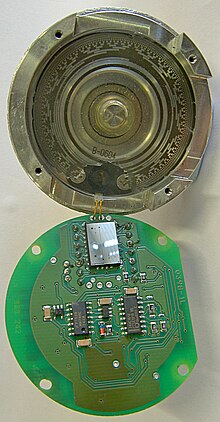 A coded position value is assigned to each angular position using a singleturn rotary encoder . This means that the angle of rotation is only known within one revolution. So that the absolute position remains known after several revolutions, the revolutions must be counted by the control and saved when switching off. In addition, it must be ensured that the measuring system is not accidentally adjusted after being switched off.

A multiturn encoder assigns a position value to each angular position and each full revolution. A zero setting or reference run is not necessary. So that the absolute position remains known after several revolutions, the revolutions in the measuring system must be able to continue to be determined even after switching off. There are two fundamentally different procedures for this.

1.   Multiturn encoder with a reduction gear

determine their position of rotation coded. A clearly coded value is assigned to each rotational position, so that even if a code is read incorrectly when the supply voltage is switched on again, this error is detected at the latest after one revolution, since then the rotational position n + 1 or n-1 would not be read . Multiturn encoders with coded detection of the rotation position use either several code disks or permanent magnets that are internally connected via several gear stages to record the rotations.

2.   Multiturn rotary encoder with auxiliary power for counting the revolutions

On the one hand, there are rotary encoders that also require a battery that supplies a revolution counter with energy even when the supply voltage is switched off.

Since 2005 there have also been multiturn encoders that record the rotation without a gearbox or battery. With these functional principles, known as energy harvesting , a micro generator or a Wiegand wire provides enough energy when the magnetic field changes to record the revolutions and store them in a non-volatile FRAM memory. These principles are now used by various manufacturers.

In contrast to the technology described under 1, both multiturn encoders described under 2 work according to the counting principle. A wrongly read value after switching on the supply voltage can no longer be recognized.

In the sliding contact , electrically conductive and non-conductive areas are applied to a code disk. A series of sliding contacts scans these areas. The position can be determined from the combination of open and closed contacts. Due to a number of disadvantages such as wear, limited resolution and limited speed, this method is no longer in use today.

In systems with optical detection, coding is carried out using a code disk. Code tracks are applied to this disk; these are scanned with the aid of an optical element either in the transmitted light method or in the reflection method. For parallel scanning, a separate code track is required for each bit to be recorded, which is then scanned individually. The code most frequently used here is the Gray code . The pseudo-random code with an additional incremental track only needs one or two code tracks .

In magnetic systems, coding is done either by evaluating the position of a rotating magnet or by evaluating a magnetic field modulated by a measuring standard using a vernier track. Bogen also determines the absolute value from the angle of the pole boundaries.

Capacitive rotary encoders consist of at least two asymmetrically shaped electrodes . Rotating the electrodes against each other changes the capacitance . The angular position can be inferred from this change in capacitance.

Inductive rotary encoders consist of at least two asymmetrically shaped electrodes. By turning the electrodes against each other, the inductance changes . The angular position can be inferred from this change in inductance.