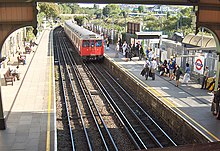 West Brompton is a train station west of central London in the Royal Borough of Kensington and Chelsea, London . It is in the Travelcard tariff zone 2 on the West London Line railway line , which bypasses the city center. In addition to trains operated by Southern and London Overground , the District Line of London Underground also operates here . In 2014, 4.47 million underground passengers used the station, plus 3.365 million rail passengers.

The station building was built according to the plans of John Fowler in the classical style. It has been a listed building ( Grade II ) since 2000 .

The West London Extension Joint Railway (WLEJR) opened a line between Kensington (Olympia) and Clapham Junction in 1860. For a number of years, the trains in Brompton went through without stopping until the station opened in 1866. On April 12, 1869, the Metropolitan District Railway (MDR), the predecessor of the District Line, opened its own station next to the WLEJR facility. This was the terminus for underground trains for eleven years; the extension towards Putney Bridge went into operation on March 1, 1880. Electric subway operations began on July 23, 1905.

In 1940 several stations along the now known as West London Line (WLL) suffered damage from aerial bombs. Passenger traffic between Willesden Junction and Clapham Junction therefore had to be stopped on September 20, 1940. The underground station remained in operation, but only freight trains ran on the WLL. The stations on the WLL were eventually demolished. In 1994, passenger traffic on the WLL was resumed; with the commissioning of two new platforms, the trains stopped from June 1, 1999 in West Brompton.