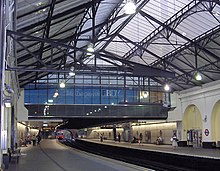 Fulham Broadway is an above-ground London Underground station in the London Borough of Hammersmith and Fulham . It is in the Travelcard tariff zone 2 on the street of the same name and is served by the District Line . In 2014, 10.77 million passengers used the station. About 200 meters to the east is Stamford Bridge , the stadium of the Chelsea FC football club .

The station was opened on March 1, 1880 by the Metropolitan District Railway (predecessor of the District Line). It was initially called Walham Green . The electric underground operation began on July 23, 1905. The station was given its current name on March 2, 1952. In 2003 a shopping center was built around the station and a new, direct and wheelchair-accessible access to the stadium was created.

Due to the crowds that the new football stadium attracted, the station building was replaced in 1905 by a new building designed by the architect Harry W. Ford. It has been a listed building ( Grade II ) since 1985 .

Actress Briony McRoberts was killed here on June 17, 2013 after being hit by a train.