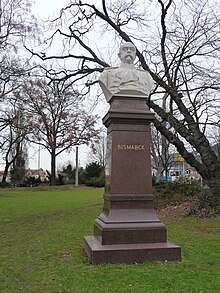 Bust of Bismarck on the north side ( from Donndorf )

The Bismarckplatz ( listen ? / I ) in Heidelberg is located at the western end of the main street ( old town ) and forms the transition to the Bergheim district . It is one of the central squares in Heidelberg and, along with the forecourt of the main train station ( Willy-Brandt- Platz), forms the most important junction for public urban transport.

The area of ​​today's Bismarckplatz formed the western border of the city from 1392, when the inhabitants of the village Bergheim in front of it were forced to move to the newly built suburb.

In 1847, a winter harbor was built at the same location to support shipping on the Neckar , an important source of income for the city. However, since at the same time rail traffic was on the advance and the winter harbor itself was a faulty construction - the entrance was too deep and too narrow, which meant that the water in the harbor basin could not drain away and rotten - the basin was opened in 1867 –1874 filled in again and a garden was built in the same place. On April 1, 1875, the former was given the name of Chancellor Otto von Bismarck on the occasion of his 60th birthday.

Over the years, Bismarckplatz has developed into a central hub for local public transport . In 1961 the Horten department store (today: Galeria Kaufhof ) opened on the south side of the square , several old buildings were demolished for the construction and which still dominates the area optically to this day.

At the end of the 1970s, as part of the urban modernization concept of the then mayor Reinhold Zundel, the tram was banned from the adjacent main street, making the main street, which starts at Bismarckplatz, a purely pedestrian zone . As part of these measures, Bismarckplatz was given its current appearance, which is characterized by the facade of the Horten department store redesigned in 1982 and the fountain sculpture in front of it by the sculptor couple Matschinsky-Denninghoff (1985) (popularly known as the spaghetti column ). The redesigned square was opened on July 6, 1986.

Bismarckplatz Heidelberg is now one of the central transfer points for buses and trams in Heidelberg. It is ideally located right in front of the city entrance (pedestrian zone).

There is also a taxi rank in the immediate vicinity of Bismarckplatz.

The ambivalent relationship between Heidelberg and Bismarckplatz becomes clear in a popular additional rhyme to the well-known student song " I lost my heart in Heidelberg ", which refers to the omnipresent pigeons: