"To the young bear" brewery 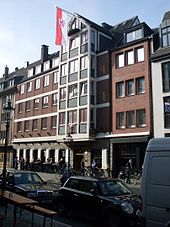 Brewery in the Füchschen today, instead of the "Zum Junge Bären" brewery 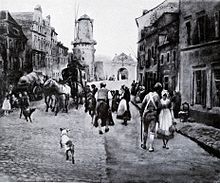 The “Zum Junge Bären” brewery, on the left after a painting by Wilhelm Schreuer

In 1647 and still in 1715 the house was called "Zur Blaue Hand". In 1682 it belonged to the deacon of the Reformed community and construction clerk Johann Loessen. Around 1746 the house belonged to the Elector Lieutenant Colonel and Major Anton Wilhelm de Grann. He had it decorated particularly magnificently on the visit of Elector Carl Theodor in Düsseldorf:

“It was mentioned many times when Elector Carl Theodor was visiting Düsseldorf, as it stood out through large-scale lighting. From the ridge to the ground it shone brighter than daylight and spread a sun-like glow over Ratinger Strasse. The window frames were emblazoned in blue and white colors and the portrait of the electoral couple hung over the door. "

“With the large lighting in honor of Duke Carl Theodor in 1746, which has already been mentioned many times, our house […] stood out in particular. It seemed as it were [...] to spread a sun-like shine over Ratingerstrasse [...] The same house was in complete fire from head to earth. The windows were all surrounded by blue and white illuminated frames, and above them the words: 'Vivat Carolus Theodorus et Maria Elisabetha Augusta' appeared in golden letters. Above the door one saw the highest portraits of the two electoral nobles among a lot of ornamentation, banding and painter's debauchery under a red-satin throne sky. The door and the lower house were decorated with blue and white pilasters and cornices, and even the sign house in front of it was surrounded by so many lights from top to bottom that it could have been called a burning guard. As beautiful as the whole work was in itself, it was especially exalted by the flaming vase placed above the highest peak of the house "

Then after the brewery it was called “To the young bear”. In 1806 Christina de Grann was the owner, in 1813 Henrich Widenbusch owned the house, where he moved his apartment and distillery. In 1887, the alderman Feister had the roof covered by the fire brigade under the direction of fire chief Adam Baum, the rear part of the restaurant was closed. The innkeeper then organized “Italian nights by lantern light”. The chronicle describes the building around 1929:

“In the Junge Bären, Ratinger Straße 30, the bohemian trade ran for decades under the brewer Jean Marx. The property went through to Ritterstrasse, where the much-known "Bumskeller" was. "

The house was later integrated into the “Im Füchschen” brewery , Ratinger Straße No. 28.

“There are curved gables with rounded ends, volutes and horizontal cornices. Good examples of this kind are the houses at Ratingerstraße 30, the beer brewery "zum Junge Bären". "