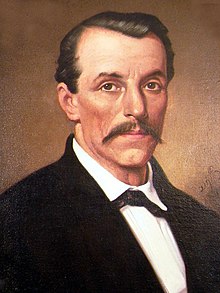 In Costa Rica he also worked as a doctor at the San Juan de Dios State Hospital . He was inspector general of vaccination and chairman of the medical association. During a campaign against the Filibusteropiraten of William Walker (mercenary) in 1856 he was a field doctor. Since the army brought cholera to Costa Rica, he had to return immediately.

As a journalist he published in various publications including El Álbum and La Estrella del Irazú, and he was also an entrepreneur. He was a cafetalero, owner of a bookstore and a pharmacy. From 1855 to 1859 he had the concession of the Fábrica Nacional de Licores de Costa Rica and was a supplier of state alcohol.

During the reign of Juan Rafael Mora Porras he was a member of parliament several times. In 1857 he was on a diplomatic mission in El Salvador. He was a delegate for San José to the Constituent Assembly in 1869, shortly after his election he resigned from this office. He had to go into exile on several occasions for political reasons. He was a member of the Partido Liberal and showed anti-clericalism.

On April 27, 1870 he was put into the presidency by Tomás Guardia Gutiérrez. During this tenure, the Comarca de Limón was founded. Religious freedom was decreed and a Ley de Garantias , which abolished the death penalty for the first time in the history of Costa Rica. A distribution plan for the ministries was drawn up. A constituent assembly was elected. The Guatemalan historian, Lorenzo Montúfar y Rivera, held a central position in his government cabinet as Minister for Foreign Affairs, Public Education and Culture.

Tomás Guardia Gutiérrez had put him into office and became president himself on August 8, 1870. He was later a member of the Gran Consejo Nacional of a government junta and was appointed as an agent in the government of El Salvador where he negotiated the Tratado Carranza-Arbizú with Gregorio Arbizú.