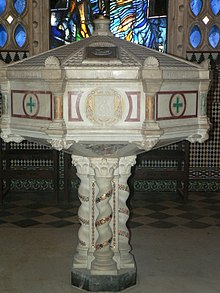 Font of the Cathedral of Santo Domingo

The Book of Slave Baptisms ( Libro de Bautismos de Esclavos ) is a 17th century baptismal register from the Dominican Republic and has been a UNESCO World Heritage Site since 2009 .

Description of the book

This baptismal register covers the years 1636 to 1670 and has been in the Historical Archives of the Archdiocese of Santo Domingo (A SD, Catedral. Libros Parroquiales, fichero 1 °, gaveta 1 a , Núm. 2 ) since its completion ; the archbishopric is also the owner of the book. It was inaccessible to the public for a long time because it was kept in the so-called parish archives of the Cathedral of Santo Domingo , a private archive where it could only be viewed by the local pastor and his assistants. 759 baptisms of slaves and four baptisms of free people are handwritten on 78 sheets with the dimensions 23.5 × 31.5 cm (the binding is lost) written on both sides.

Baptisms of slaves in the West Indies

Around 1600 it was assumed that the people who were brought to the West Indies on the slave ships had already been baptized in Africa. At least that's how the slave traders portrayed it . But there were doubts as to whether that was even true. Pedro de Oviedo, Archbishop of Santo Domingo, arranged for the validity of the baptism to be checked during his tenure (1621–1628), and if there were any doubts, the baptismal class had to be started immediately upon arrival at the port, one after 30 days Conditional baptism should follow. The Christian slaves should be given the opportunity to attend mass six times a year; the slave owners should give them access to Confirmation , the Sacrament of Penance, and the Last Unction . That the church was satisfied with an intermittent service visit suggests that there was no greater interest in the religious life of these new Christians.

Of the slaves recorded in the Libro de Bautismos de Esclavos , 324 were adults and 435 were minors or children of slaves. The naming is based entirely on Catholic custom, the following names are the most common:

Many children only mention the mother. Six of the baptized children were children from legitimate marriages. An isolated case is the following baptism of two criollos (contemporary name for people born in America) with a release :

The following were named as owners of the baptized persons:

The remaining owners included, for example, a grocer, a shoemaker, a tailor and a merchant.

A letter from the archbishop to the king on September 15, 1662 shows that insurgent and fugitive negros found refuge 50 leguas away from the city in an extensive and fertile mountain region, where they lived "without religion and priests", ruled by negros ladinos . Ladinos were African slaves who could speak Spanish.

Such places of refuge were called El Maniel by the fugitive slaves on the island of Hispaniola . On March 15, 1663 Philip IV ordered the President Pedro Carvajal y Cobos to dissolve these settlements by force of arms.

The following entries are particularly informative: fourteen slave boys and ten slave girls, who were born in El Maniel by their named mothers , were baptized on April 13, 1667 in the cathedral by Archbishop Don Francisco de la Cuevo Maldonado himself; on May 27 of that year, the seminary's preceptor baptized four more girls and three boys. Between May and September 1667, Fathers Diego de Plasencia and Domingo de Chávarri baptized a total of four children and eight adults, most of them female; in three cases they were identified as “ negras criollas from Maniel ”, which had been taken into slavery by the military from there.

“Juan José. In Santo Domingo, on February 27, 1669, a boy named Juan José was worthily baptized and anointed with oil and chrism, the son of a negra who was among those brought here by Captain Villalobos, a slave of Antonio Pinto; his godfather was Bartolomé de Espinosa, a soldier of this garrison. Witness Pedro Nolasco. "

Captain Juan de Villalobos headed a command that was used against the slaves who had fled in Maniel .

Registration of slaves in church registers

It is known from almost all Cuban church archives that from 1665 to 1881 the Catholic Church kept its own registers for the baptisms , confirmations , marriages and burials of the slave population, the so-called books for Pardos y Morenos . The Book of Slave Baptisms is the only such book from the island of Hispaniola. It ends on September 29, 1670, after which a common baptismal register was created for free and unfree baptized people.

The original book of the baptisms of slaves has been preserved and not a duplicate. It provides insights into the economic crisis that hit Santo Domingo in the 17th century, but has so far not been used by historians dealing with this period, so that its content is little known. Although it is not the oldest church book, there is a baptismal register for the years 1590 to 1638. But this only records the children of the “white” residents of Santo Domingo. Therefore the book of slave baptisms is a rare and valuable source for the life of the “black” population.