The Nagoya Castle ( Jap. 名古屋城 , Nagoya-jō ) is a Japanese castle in the city of Nagoya . The original part of the castle was built by Shiba Yoshimune in 1532. Oda Nobuhide took it over in 1532, but later destroyed large parts. 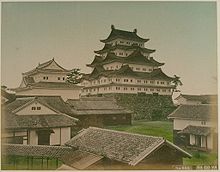 Nagoya-jō with the Honmaru Palace around 1880.

In 1609, Tokugawa Ieyasu ordered the rebuilding of the castle with the support of various daimyo . It was completed in 1612 and served the Owari-Tokugawa , a branch family, as a noble residence until 1868 .

The castle survived the Edo period and was only destroyed to the ground during the Second World War . Only three gates and three small towers ( 櫓 yagura ) in the south-west, south-east and north-west remained intact. In the course of the reconstruction after the Second World War, the main tower, the smaller tower connected to it and the main gate were rebuilt in 1959. A garden with the Ninomaru tea house belongs to the castle complex. In 1952, the original facility was declared a special historical site ( tokubetsu shiseki ).

The castle is particularly famous for its two golden kinshachi ( 金 鯱 ). These are stylized dolphins attached to the gables of the main roof. They are also a symbol of the city of Nagoya.

In February 1615, the Hommaru Palace ( Japanese 本 丸 御 殿 ) built south of the two castle towers ( donjon ) was completed. It initially served Yoshinao Tokugawa, the founder of the Owari feudal family, as a residence until the family moved to the Ninomaru Palace of Nijō Castle in Kyoto in 1620 . Afterwards it acted as a hostel for shoguns on their way to the capital.

The rooms of the palace were themed; The walls and movable partitions were painted in the Japanese style by the famous painters Kano Sadanobu and Kano Tan'yū of the Kano School . The palace, which was considered to be one of the most beautiful palace complexes in Japan, burned down as did the castle towers in May 1945 during World War II. Many of the movable walls and paintings were saved from the flames. 1,047 paintings were classified as important cultural assets.

The palace has been rebuilt since 2009. It should be completed by around 2018. Only traditional materials and construction methods are used. Individual areas are to be opened to visitors as early as 2013 and 2016. The ongoing reconstruction work in a large hall has been open to the public since 2010.