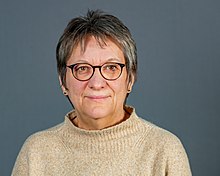 Cornelia Möhring (born January 9, 1960 in Hamburg ) is a German politician ( Die Linke ) and graduate social economist. In 2009 she moved into the Bundestag for the first time as a member of the Bundestag via the state list of the Left Schleswig-Holstein . From 2009 to 2011 she was the women's political spokeswoman for the left-wing parliamentary group in the Bundestag and was elected first deputy parliamentary group leader in November 2011. With the beginning of the 18th legislature, she is again a member of the German Bundestag. She was re-elected by her parliamentary group as spokeswoman for women's affairs and as deputy chairwoman. She is also the spokesperson for women's affairs in the 19th legislature. and vice-chair of the group.

Cornelia Möhring completed an apprenticeship as an industrial clerk after completing secondary school . In her second education, she studied social economics at the Hamburg University of Economics and Politics with a focus on organizational sociology and social psychology. In the subsequent postgraduate studies, she dealt with feminist theories and women's studies and graduated as a social economist.

Since 2002 she has concentrated with her seminar and consulting company on the support and training of works and staff councils.

Möhring is married and has one grown son.

In the 2009 Bundestag election she was elected to the German Bundestag via first place on the Schleswig-Holstein state list. In this function, she headed the women's plenary session and women's policy. As the first deputy chairman of the parliamentary group, she was responsible for human resources and finances from 2011 to 2013, headed the group’s chief human resources and finance officer and was responsible for the strategic issue of “social and ecological restructuring”. In the 19th Bundestag, she has also been the spokeswoman for women's policy and one of the deputy chairmen of the DIE LINKE parliamentary group since 2017.

She has been a member of the Parliamentary Assembly of the Council of Europe since September 2019.

Cornelia Möhring supports women's initiatives and women's shelters, is co-initiator of the Berlin Declaration and works in the women's rights commissions of the United Nations and UN Women. She is a member of the Rosa Luxemburg Foundation, a member of the board of the Solidarity Modern Institute and a member of the Foundation for the Friends of the Tower Castle Lütjenburg.

Cornelia Möhring has been active as a lobbyist since her school days. From 1974 to 1978 she was head of the school and member of the board of the Hamburg Chamber of Students. She later became a youth representative and works councilor in various large Hamburg companies. She has been a member of the union since 1976 - today ver.di. Cornelia Möhring was a member of the SDAJ in the 1970s and 1980s. She left the renewal movement in 1988 and focused on political work outside of organizations. It was not until 2007 that the LINKE merged from the PDS and the WASG, creating a new left-wing project in the Federal Republic, that it decided to become a member of the DIE LINKE party.

From 2007 to 2008 she was district spokesperson for LINKEN.Plön and from 2008 to 2010 co-state spokesperson for LINKEN.Schleswig-Holstein. At that time she made it her task to consolidate the LINKE in Schleswig-Holstein in its structures and to prepare the state elections, from which the LINKE emerged for the first time with a six-member state parliamentary group. Even today, it supports its national association in this consolidation, just as it does with anchoring it locally and working with clubs, associations and initiatives.

Cornelia Möhring does not belong to any current in or in the LINKEN, and at the same time considers the plurality of a modern left project to be an important prerequisite for a common, democratic political development. In the so-called dialectic connection, an association of party women, scientists and politicians from various currents around the feminist Frigga Haug , she tries to combine political-scientific work and further education with practical politics. She regularly works as a columnist for the Internet platform Die Freiheitsliebe.