The Deprez breaker is a magneto-electric breaker . It was invented by the French physicist Marcel Depréz . The Deprez interrupter is basically a modified Wagner hammer with which up to 40 interruptions per second can be achieved. 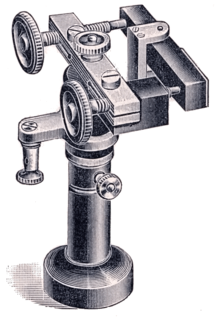 The interrupter consists of the prismatic piece of soft iron visible on the far right, which can be rotated about an axis passing perpendicularly through it. The rear end of the iron prism (right outside) is attracted by an electromagnet in the circuit , which interrupts the current passing through the screw and the iron prism. The electromagnet becomes inactive and a small spring pulls the iron back into its original position and the process is then repeated from the beginning.