The German Buddhist Union eV - Buddhist Religious Community (DBU for short) sees itself as a cross-tradition umbrella organization of Buddhists in Germany . The DBU was founded in 1955 as the "German Buddhist Society" with 43 members at the time and currently consists of 64 communities (as of 8/2019).

Members of the DBU are Buddhist groups and organizations from various teaching traditions. Natural persons can become individual members in the subordinate Buddhist community of the DBU (BG) , which is also one of the groups with the largest number of members with more than 6,300 members. (As of 6/2017)

The DBU publishes a quarterly magazine under the name Buddhismus Aktuell . The office is in Munich.

Structures of the DBU

The delegates of the member communities meet once a year on the last weekend in April. Every three years a council of eleven people is elected, which in turn appoints a three-person board from among its ranks. The Management Board currently (as of 2017) consists of Martin Hage, Nils Clausen, Claus Herboth and Felix Baritsch. The content-related work of the DBU takes place in working groups (AGs). Honorary President of the DBU was Max Glashoff .

Goals of the DBU 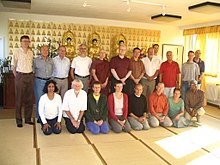 The German Buddhist Union has the following goals:

An expression of the common ideological basis of the groups and individual members united in the DBU is the Buddhist creed, which became part of the statute as a preamble in 1984. This commitment was revised in 2004 by the general meeting in intensive discussion and the amended version was accepted with one abstention and no dissenting vote. A Buddhist group that wants to become a member of the German Buddhist Union must recognize the text of the DBU's Buddhist Confession as binding.