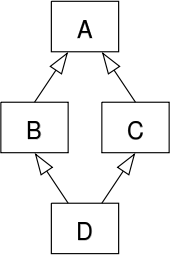 Inheritance Relationships in the Diamond Problem

The Diamond problem arises from multiple inheritance in object-oriented programming and knowledge modeling . It can occur when a class D descends from the same base class A through two different inheritance paths ( B and C ) . Draw the inheritance relationships between the classes, as a graph, as the shape of a resulting diamond (English rhombus or diamond ), after which the Diamond problem is named.

The problems of multiple inheritance can be illustrated using the example of an amphibious vehicle that inherits both the properties of a land vehicle and those of a water vehicle . The diamond problem occurs here when both are descended from the vehicle class , which has a method of locomotion and the properties maximum speed and seats (for occupants). The question now is whether there is an amphibious vehicle

In addition, the maximum speed varies depending on the use, but the number of seats does not. It would therefore make sense to store two different values ​​for the former, but only one value for the latter. The first ambiguity can only be resolved in individual cases; For example, an amphibious vehicle has two modes of travel, even though the vehicle only has one mode of travel .