Servants of the Sacred Heart of Jesus 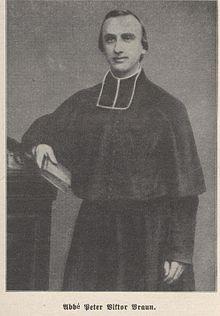 The Servants of the Sacred Heart of Jesus are a Catholic religious community .

The community of sisters was founded in Argenteuil , France , in 1866 by the Lorraine priest Peter Viktor Braun according to the Augustinian-Salesian observance . The community emerged from a group of women who supported Father Braun in his charitable work. Father Braun consecrated the group to the Sacred Heart of Jesus on October 17, 1866 .

On February 28, 1868, the first solemn dressing took place in the Chapel of the Dominican Sisters in Sèvres , near Paris. On January 28, 1917, the new community received its final license to practice medicine. The parent company has been in Versailles since 1883 . Independent branches were set up in England and Vienna. The sisters devote themselves to charitable work, especially protecting girls and caring for the poor and the disabled.

After the Franco-Prussian War , the German sisters could not return to France. In 1873 a branch was founded in Vienna with a subsidiary near Cologne. The Vienna branch became autonomous in 1893. Their constitutions were approved on February 23, 1926. Today there are branches in Germany, Austria, Poland and the Czech Republic.

The three independent communities founded the Viktor Braun Federation , which was approved by the Holy See on July 4, 2003 . It comprises the three independent institutes that emerged from its foundation in 1866: Sisters of the Sacred Hearts of Jesus and Mary (England, Diocese of Brentwood ), Sœurs Servantes du Sacré Cœur de Jésus (France, Diocese of Versailles ) and the Servants of Sacred Heart of Jesus with her mother house in Vienna. The federation is under papal law.