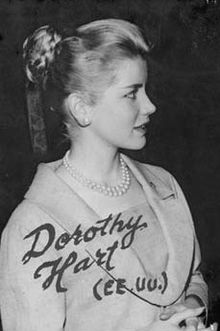 Hart began her career as a model in the early 1940s and was signed to Universal Pictures in 1947 after only one film for Columbia Pictures (Gunfighters) . There she had her greatest success in the two-time Oscar- winning work by Jules Dassin , City Without a Mask . To German viewers she was probably known mainly as Jane in Tarzan, the defender of the jungle with Lex Barker . Despite - or perhaps because of - its elegance and strong charisma, the studio was unable to adequately cast it, and so it was more or less used up in B-movies such as westerns and prison films. As a result, she gave up her film career in the early 1950s; the productions of Hollywood's film industry had become too superficial for her, as she herself said.