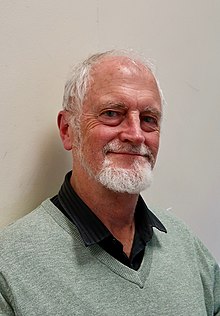 Dougal Dixon (born May 9, 1947 in Dumfries , Scotland ) is a British paleontologist and evolutionary researcher.

Dixon studied geology and paleontology at St Andrews University . Since 1973 he has been successfully publishing non-fiction books from his research area. In 1982 he finally created the work that made him famous: In After Man (dt. The world after us ) he presented a world that lies 50 million years in the future. Nature has been able to recover from extinct humans and the destruction it brought, and new species have developed. The book was designed as an overview of the theory of evolution and presented various methods of evolution. The book was so successful that other similar works followed. In The New Dinosaurs he develops a world in which the dinosaurs never became extinct and in Man after Man he introduces the idea of ​​a future fragmentation of man into a multitude of species .