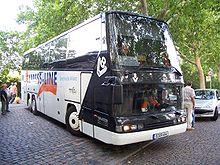 Drögmöller was a body construction company founded in Heilbronn in 1920 , which mainly produced high-quality coaches and was sold to Volvo in 1994 . The body shop was discontinued in 2005 and Volvo bus production relocated to Poland. Thereafter there was only a repair and maintenance operation in Heilbronn, which Volvo finally closed in 2010 as well. Drögmöller produced a total of around 3500 buses.

The body shop was founded by the Mecklenburg wheelwright and body shop technician Gotthard Drögmöller (born August 3, 1884, † January 29, 1957 in Heilbronn ) in the back building at Allee 36 in Heilbronn. In 1921 Drögmöller acquired a property on Heilbronn's Koepffstrasse. In 1923 he was also able to acquire 14.2  a building site at Koepffstrasse 7 in Heilbronn. Initially, car bodies and truck platform bodies were manufactured. In the 1930s, bodies began to be manufactured for buses .

In 1957, son-in-law Carl Schmid took over management. Initially, body structures (cars and buses) were manufactured on chassis from Ford, Opel, MAN, Büssing , Henschel and Daimler-Benz . In 1965, Plant II was opened in Heilbronn on Lichtenbergerstrasse for body construction. The repair shop remained in Plant I (Koepffstraße).

Since 1965, the Drögmöller superstructures have only been mounted on Daimler-Benz chassis. In the same year, the DR 35 (Drögmöller coach with 35 seats) was the first vehicle to be completely built. A special segment was formed by touring coaches with seating that rises to the rear, so-called panorama or theater seating, which offers passengers more options to see ahead than conventional buses.

The number of items in the Drögmöller body series has always been low. For decades the annual production was around 100 buses. A total of around 3500 vehicles were manufactured at Drögmöller.

In 1995 the company was renamed Volvo Bus Deutschland GmbH . However, Volvo's hope failed. After a new model with typical theater seating, the Volvo 9900 , was introduced in 2001, production was finally stopped in 2005 and the plant in Heilbronn closed. The workshop, customer service, used bus sales and parts of sales remained in Heilbronn until 2010 . The Volvo buses offered on the German market today with the series 7700 ( city ​​buses ), 8700 ( intercity buses ) and 9700, 9900 (coaches) are manufactured in Poland; Volvo buses remain a marginal phenomenon with a market share of around 2% in Germany.

The Drögmöller company is part of the exhibition in the Heilbronn House of City History .