This article describes the place Ebolowa; for the former district of the same name, see Ebolowa (district) .

Ebolowa is a city in southwest Cameroon with 60,360 inhabitants according to an estimate from 2005. It is the capital of the Sud province . 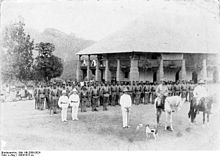 Ebolowa is located in the settlement area of ​​the Bulu , an ethnic group related to the Ewondo and belonging to the Beti group. The Boulou area was gradually brought under German suzerainty at the end of the 19th century and finally pacified after the so-called Bulu uprising (1899/1900). A German military station was established in Ebolowa in 1899. After the unrest ended, it became the seat of the independent military district of Ebolowa , which in 1908 was expanded to include parts of the dissolved Lolodorf district . In 1913 the occupation was withdrawn and the district converted into a civil district office. As the seat of the local administration, Ebolowa developed into the main staging area for the rubber trade in Southwest Cameroon.