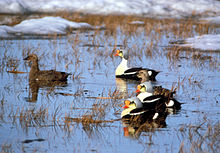 The eider ducks are the species of the bird genus Somateria in the family of ducks (Anatidae). The German-language name of this genus was established through the trade in down of the eider , probably the best-known representative of this genus. Eiderdown is considered a material with very good thermal insulation and was used in particular for filling duvets. To this day, eiderdown is commercially harvested and processed on Iceland, and for a long time eiderdown was one of the island's most important export goods. Both the name for the bird and its feathers (eiderdown) are borrowed from the Icelandic æðr .

They are large, clumsy and clumsy ducks in the country. The wedge-shaped beak has a frontal process in two of the three species. The sexual dimorphism is particularly significant in terms of coloration. The drakes have in breeding plumage , a green color on the head, a black belly and a predominantly white top. In the plumage on the other hand they are black brown as females.

Among the ducks, the eider ducks are the species that have adapted most to sea life. Non-breeding birds live exclusively in the sea.

Distribution and way of life

They occur in the northern coastal areas of the Holarctic . In winter they move south into ice-free waters. Eiders generally live near the coast and dive for clams , crabs , crabs, and other small animals. They are good swimmers and divers who do not mind rough seas.

The genus consists of three types: