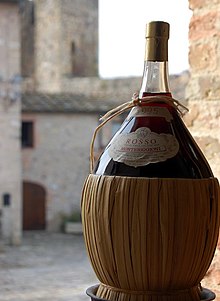 As Fiasco ( ital. Fiasco to "bulbous bottle" Medieval-. FLASCO "kegs") refers to a straw-covered bottle of Chianti . In addition, the term "Fiasco" is often used for other types of bottles and types of wine.

It developed from the clay barrels of antiquity in the late Middle Ages ; the straw cover originally served to protect the then thin-walled glass from being damaged by knocking it against the bottle next to it.