Foton ( Russian Фотон for photon ) is the name of an unmanned spacecraft that the Soviet Union and later Russia developed from 1985 onwards on the basis of the Vostok spaceship and initially used for material science and technical experiments, and later to an increasing extent for biological experiments. 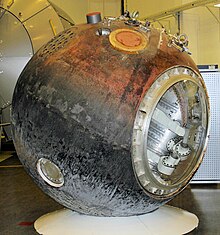 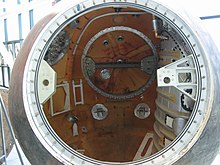 After the Soviet Union had successfully carried out four missions Foton 1 to 4, an experiment designed by Western Europe flew for the first time at Foton-5. From 1991 ESA participated in Foton 7 to Foton 12. The rockets were launched from the Plesetsk Cosmodrome .

The first model after the conversion to the Foton M series was lost in 2002 due to the failure of the Soyuz launcher when it was launched from ramp PU-3 in Plesezk and after 29 seconds it fell just 350 meters away into a wooded area. The start of Foton-M2 was successful in May 2005 and the landing capsule successfully returned to earth after 16 days from space. Foton-M3 took off on September 14, 2007 at 11 a.m. UTC and landed in the Kazakh steppe on September 26, 2007 at 7:52 a.m. UTC. In addition to material science, biological and medical experiments (more than 70 in total) were carried out on board the 6535 kg satellite.

July 24, 2014: Announcement of the partial loss of connection to the research satellite Foton-M4 since its launch on July 19. The situation was not classified as critical because data could still be received, but the satellite's engines could not be switched on to bring it into orbit. Temporary problems with the control of the satellite have been resolved.

September 1, 2014: Foton-M4 was able to return safely to Earth. The five day geckos of the species Phelsuma ornata on board , with which the effects of weightlessness on growth and mating behavior could be studied, were found frozen.