The Free Internet Chess Server , FICS for short , is a chess server for playing live games online. Everyone can participate in games for free.

Founded in 1995 and a non-profit organization since 1998 , FICS is today the largest free chess server of its kind. The Glicko system gives users a rating so that it is easy to find players of equal strength. In addition, the server regularly offers tournaments and international chess events can be followed live.

Annoyed that their idea was being exploited commercially, some programmers, led by Chris Petroff (Sparky) , found themselves and founded FICS. The server started working on March 5, 1995. On July 18, 2013, the server was cracked and was not connected to the network for eight days. On August 25, 2013, malicious crackers again took control of the server. 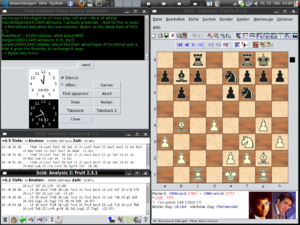 For this purpose, the user can use the Jin applet or Javaboard on the website .

However, it is recommended to use one of the many chess programs , as these have more functions. A list that is not entirely up to date can be found on the FICS homepage. Popular programs are:

In addition to normal chess, it is also possible to play some chess variants on FICS . These are:

FICS also allows lag players . Although the transmission delay is compensated by a time seal, the sense of time can be impaired, especially in a flash game. Other servers, such as ICC, do not allow players with high lag to start games or pair them against other players with poor connections.