The Graysche paradox is a flow effect , the case of fast whales , such as the dolphins occurs. The body, especially of these types, has in reality far better flow properties than is the case with a technical body with the same shape. The name goes back to the British zoologist James Gray . He had suspected that the muscles of these marine animals were not strong enough to maintain the observed swimming speeds of ten meters per second against the resistance of the water. 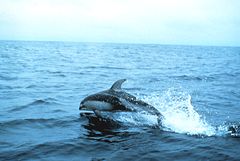 This phenomenon is attributed to the dampening properties of the skin, which dampen the disturbing vortex formation . For this purpose, the dermis (corium or dermis) has long papillae that form a seam and are interlocked with the epidermis above . The papillae of the dermis sit on lamellae, which are largely positioned transversely to the longitudinal axis of the body and thus also to the direction of flow. Due to their length, the papillae were initially thought to be the excretory ducts of sweat glands , but today we know, in addition to the real function of the structure, that whales have no skin glands with the exception of the mammary glands. In addition to these damping structures, the skin has a microscopically fine relief pattern and the results of physiological experiments also assume an active reaction of the skin.

The improvement of the flow properties could be simulated through various experiments with artificial whale skin.

Resolution of the paradox

Frank Fish of the University of Pennsylvania and Tim Wei of Rensselaer's School of Engineering in New York State solved the paradox in 2008. They filmed two bottlenose dolphins swimming. The movements of hundreds of thousands of small air bubbles in the water were recorded on video and analyzed by computer. In this way, the force that dolphins develop with their tail fin could be measured: an average of more than 940 Newtons . This means that the force that the animals normally achieve for propulsion is around ten times greater than James Gray suspected in 1936. If a dolphin stands upright on its fin above the surface of the water, the force of up to 1800 Newtons is up to 20 times higher than long assumed. The results were presented at a physicist congress in San Antonio, Texas. Quote: “We can now say that we have solved the riddle. The answer is very simple: The dolphins are much stronger than James Gray and many other people thought. "