An isolating traverse is a traverse of an overhead line mast that also acts as an isolator . Like any traverse, it is attached directly to the mast. 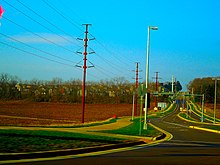 Insulating beams on a mast in Wisconsin with two insulators 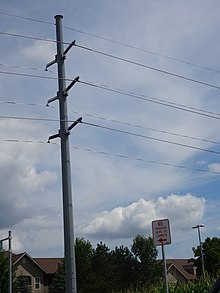 Insulating trusses on a mast in Wisconsin with an insulator

A typical design consists of two straight insulators: A long rod insulator is clamped at one end directly to the mast or to a very short cross-member and leads downwards at an angle from the mast. The conductor cable is attached to its end. A second insulator, called a post, is mounted horizontally between the conductor and the mast. The long bar is under tensile stress, the support is typically under compressive stress.

There are also designs with only one isolator. However, this must then be built very robustly because of the mechanical stresses to be absorbed.

Insulating crossbars are exposed to increased mechanical loads compared to conventional metal crossbars with suspended insulators. Therefore, they could only be realized after advances in insulating material development.

Overhead lines with insulating traverses require lower mast heights and, above all, significantly smaller spanned areas and route widths. This enables the construction of very compact lines. However, insulating crossbars have the disadvantage that wind-induced vibrations put an increased load on the conductor cables, as they cannot swing out. In the case of masts with insulating traverses, access to the top of the mast is also fundamentally not possible without interrupting operations.

Insulating trusses are widely used in the USA. In Germany they are only used in special cases, for example for 110 kV lines on wooden poles according to the PORTRA system . In Switzerland, the Rhaetian Railway has relocated parts of its 66 kV supply network on insulating trusses attached to extended catenary masts .