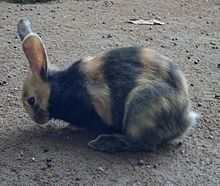 The Japanese rabbit is a medium-sized breed of rabbit weighing 3.75 to 4.25 kg.

Appearance of the Japanese rabbit

The color of the Japanese rabbit consists of yellow and black color fields. Today, the aim is to distribute the colors in as pure color fields as possible, which should not be interspersed with hair of different colors. The whole body should be covered with color fields that are not too large, and staggered stripes on the two halves of the body are desired. A cross drawing is sought for the head drawing, i.e. H. one side of the head should be black, the other yellow, with ears of opposite color. The name Japanese seems to be a fantasy product of its French breeders, it has nothing to do with an origin from Japan .

In Great Britain and the United States , the Japanese is known as Harlequin, and, as Sandford writes, the breed was renamed "in an outbreak of patriotic sentiment" during World War II. In Great Britain, a blue-yellow, brown-yellow and yellow-yellow color scheme are recognized in addition to the black-yellow.

The coloring of the Japanese rabbit is caused by a mutation of the gene for the development of black (yellow series, symbol German B, international E) to bj or e j. It is unclear whether all Japanese breeds strive for this, the wild color factor G / A has been replaced by the factor for monochrome g / a. The hereditary formula of the Japanese rabbit is therefore:
AbjCDG (g) (German symbols) or A (a) BCDej (English symbols).

History of the Japanese rabbit

As Hochstrasser assumes, rabbits with a Japanese drawing have existed for a very long time, but these were not taken into account and developed into a breed according to plan. Dorn writes about the origin and naming of the Japanese rabbit:

"Its origin is completely unknown and it is pointless to make any assumptions and to develop constructions about its origin. The only thing that is certain is that we know nothing about the development of this breed. It is also unclear which joker came up with the name of the breed and which Reason he had for this. "

In 1887 rabbits were shown for the first time in Paris under the name Japanese . The drawing of the animals at that time also had white parts that were only bred away in the course of time. The Japanese rabbits came from France to Switzerland , where the first rating scale for this breed was published as early as 1896, and via England to Germany.

In Germany, August Lange made a special contribution to this breed in Freiberg . For a long time there was a dispute among German breeders as to which color distribution the Japanese should have; While some of the breeders wanted a rabbit that looked as colorful as possible with round spots ("flowered drawing"), others placed great emphasis on a regular, quasi-checkerboard distribution of the color fields, consisting of colored stripes that were offset as accurately as possible on the back line are. After a long-term compromise, according to which both drawings were equivalent, the associations at that time ZDK (now ZDRK) and VKSK agreed in 1960 to place the breeding goal on the regular distribution of the color fields, while in the BDK both drawing variants are still possible are.

Today Japanese rabbits can be seen regularly at exhibitions.

The smaller Rhön rabbit also owes its coloration to the Japanese factor, but in combination with the chinchilla factor, which leads to a black and white coloration. In contrast to the Japanese rabbit, an uneven, spotted distribution of the color fields is required here. The Rheinische Schecke and the "Kleinscheckenkaninchen" (Czech Schecke / Dreifarbenschecke), the three-colored Dalmatian-Rex and the three-colored Schecken-Rex combine the Japanese factor with the system for point spotting. The Jamora rabbit is a small long-haired breed, the Japanese reindeer a short-haired breed, which also show the Japanese drawing. The Japanese designation is permitted in many other breeds: Dutch rabbits, colored dwarves, dwarf rams, lion and teddy rabbits, small rex (Japanese-colored and king-coat checkers) and many more