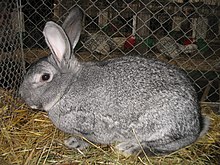 Characteristic for both breeds is the bluish tinted, ash-gray color with the most flaky shading caused by the guard hair. The distribution of the color zones corresponds to that of the wild-colored rabbit. The characteristic color is caused by a mutation of the gene for color formation (German symbol A, English symbol C) to achi or ach2, which causes the loss of the yellow pigment in the hair, the corresponding zones remain white. The chinchilla coloration belongs to the albino series . The rabbit breed was named after the chinchilla because it looks more or less similar to the chinchilla fur, depending on its characteristics.

The corresponding hereditary formula is:

History of the chinchilla rabbit

The first chinchilla rabbits were shown in Paris in 1913 by the French breeder Dybowski, who, however, did not provide any details about the original breeds used, in the literature there is talk of Russian rabbits , Blauer Wienern (after Sandford Blaue van Beveren) and wild rabbits . Since the chinchilla coloration is a mutation, it could either have occurred in Dybowski himself or it could already have been present in a recessive manner in the animals he used. The animals shown by Dybowski were of the type of today's small chinchilla. Chinchilla rabbits described by previous authors, for example Charles Darwin , appear to have been described more likely to have been silver rabbits .

Chinchilla rabbits came from France to England in 1915 (Joppich) and 1919 (Sandford) and from there to Switzerland and via the Netherlands to Germany . Apparently there were differences in coloration between the English and French breeding lines. Joppich describes the animals imported from England as darker than the French. While these animals corresponded to the type and size of today's small chinchilla rabbits, larger chinchilla rabbits were bred in England as early as the early 1920s by Chris Wren, which were called chinchilla giganta. Animals of this type were also imported into Germany, but the exact time is not entirely clear. While Dorn quotes after Wischer that this was done in 1920 by Gustav Arlt from Guben, Joppich writes that the import mainly took place in northern Germany. In addition, chinchilla rabbits of a larger type were also bred in Germany independently of the English animals, for example by Geyer in Ilmenau . The large chinchilla rabbit became popular very quickly, and its rapid spread may also have been due to the fact that it was included among the recognized economic breeds and thus received special support in Germany before and during the Second World War.

The chinchilla factor is represented in other rabbit breeds, e.g. B. in the white awn rabbit and in the black awn rabbit , in addition, the chinchilla color is recognized as a color of other breeds.

Corresponding mutations also occur in other animal species; the famous white tigers are said to be due to an analogous mutation.