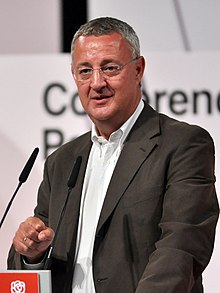 Jesús Caldera Sánchez-Capitán (born October 31, 1957 in Béjar , Salamanca province ) is a Spanish politician of the socialist PSOE . From 2004 to 2008 he was Minister for Labor and Social Affairs in the first Zapatero cabinet .

After studying political science and sociology at the Complutense University of Madrid , Caldera first worked in the municipality of Lagunilla (Salamanca province).

After joining the socialist party PSOE, he was first elected as a member of the Spanish parliament in 1982 , to which he has been a member since then. After the election of José Luis Rodríguez Zapatero as party leader, Caldera was spokesman for the Socialist Group in parliament from 2000 to 2004. After the PSOE won the Spanish parliamentary elections in 2004 , Caldera was appointed Minister of Labor and Social Affairs on April 18, 2004.

As minister, Caldera was in charge of the legalization of around 800,000 immigrants who had previously worked in Spain without a residence permit, one of the Zapatero government's most important projects. In addition, at the end of 2005 he pushed through an extension of the right to parental leave for civil servants. At the beginning of 2006 he implemented a labor market reform called for by the trade unions in particular, in order to counter the practice of stringing together temporary contracts and to improve protection against dismissal .

Before the Spanish parliamentary elections in 2008 , Caldera adopted the PSOE's campaign strategy, which eventually led to renewed success for the party. When the cabinet was reorganized, however, he resigned as Minister of Labor; instead, Zapatero announced that Caldera would take over the management of a new PSOE party foundation.