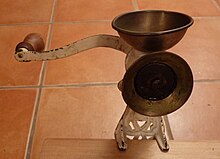 Porkert is said to have been born in Abertham , Bohemia . In the church registers there, however, there is no birth or baptism entry for the period mentioned.

He studied at the Příbram mining academy and in 1863 became director of the Růženiny hutě (rose works) in Skuhrov nad Bělou, an ironworks founded in 1817 by Count Hans Kolowrat . When iron production was stopped in 1879, Porkert rented the company in 1881 and converted it into an iron foundry . He produced oven heaters, V-belt pulleys and piano frames . The company manufactured sprues for the Antonín Petrof company in Hradec Králové (Königgrätz) and supplied other well-known piano manufacturers such as Bösendorfer , Hoffman-Czarny, Baumann, Ehrbar and others.

After Josef Porkert's death in 1895, his sons Wilhelm and Eduard took over the company. They expanded the product range to include kitchen machines and, above all, hand-operated meat grinders and other hand turning mills , which were the main focus of production in the following decades. In 1911 the annual production of "Porkert a spol." Was 100,000, in 1929 it was 400,000 kitchen appliances. Three quarters of the production was exported. The main customers were Poland, England and overseas. In the 1940s, electrical appliances and kitchen robots were also added.

In 1948 the company was nationalized and a large part of the product range was outsourced to other companies. From then on, the Skuhrov plant only produced classic hand mills. The restitution in 1992 to the heirs of the Porkert family was unsuccessful. In 2007 the company went bankrupt. The same thing happened to the successor Karavela Properties, who took over operations in 2008. The traditional plant has been closed since 2010.