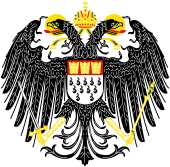 Coat of arms of the independent city of Cologne 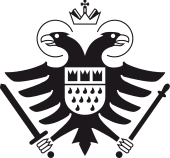 Emblem of the Cologne city administration

The Cologne coat of arms has existed for more than 700 years. It has changed several times in the history of the city of Cologne and today adorns many logos and emblems of Cologne institutions and companies . 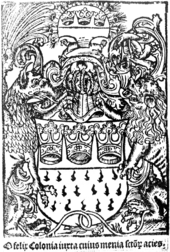 Old Cologne coat of arms around 1900

Cologne coat of arms during the French occupation from 1811

Cologne coat of arms on the tower of Bremen Central Station

Along with Lübeck, Cologne co-founded the German Hanseatic League , which is why the shield bears the colors of the Hanseatic League: red and white. The three crowns have been the city's emblem since the 12th century and commemorate the Three Kings , whose relics were brought to Cologne in 1164 as a gift from Emperor Friedrich I Barbarossa .

The eleven black drops or flames (in Cologne one speaks of “tears”) have adorned the city's coat of arms since the 16th century and reminds of Saint Ursula , according to legend, a pious daughter of the King of Brittany , Maurus . Actually, the drops represent ermine tails , which were in the old coat of arms of Brittany. According to legend, the Virgin Ursula was on the way back from a pilgrimage to Rome with her ten virgin companions . Possibly it was the cult of relics , which emerged in the Middle Ages, that made 11,000 of the eleven virgins (hence “Ursula and the 11,000 virgins”). They were murdered by the Huns under Attila near Cologne . Over the years, all of the bones that were found in and around Cologne (usually Roman tombs that were usually laid out on streets) were placed with the eleven virgin bones, and thus Cologne has the largest ossuary north of the Alps.

The coat of arms (the escutcheon) is framed by a double-headed eagle with scepter and sword. This symbol of the Holy Roman Empire , in which an eagle head stood for emperor and royal power , embodies the status of a free imperial city , which Cologne received de jure in 1475 (de facto already when the archbishopric was shaken off by the battle of Worringen in 1288) .

During the French occupation, Napoléon Bonaparte gave the city of Cologne a new coat of arms in 1811. Cologne was classified as one of the cities of the first order, also known as the Good Cities of the French Empire (Bonnes villes de l'Empire français). There were three golden bees in the red head of the shield. Around the shield was a golden wreath braided with red ribbons, made of olive branches on the right and oak branches on the left. On the shield there was a rod of Mercury and above it a high golden wall with a seven-pewter wall crown from which a golden eagle grew.

Commons : Coats of arms of Cologne  - Collection of images, videos and audio files