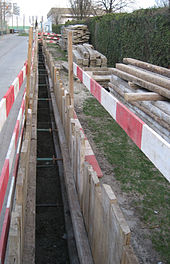 A trench for laying a pipe

With Künette (French. Cunettes , ital. Cunetta ) is in low- and in hydraulic engineering a grave shaped excavation with inclined walls referred to. The word is derived from the Latin cuneus "wedge" or cuneatus "wedge-shaped". The term is also used for the low water channels installed in the bottom of larger channels .

Since ancient times, the trench has often been sunk as a small drainage ditch in town and fortress construction at the foot of a dry earth trench. These trenches were laid in front of the walls of the military facility as an obstacle to the approach in order to provide additional protection against attackers. Künetten were often necessary to allow rising and rainwater to drain in a targeted manner. This prevented the erosion of the earthworks in the actual trench. Regular cleaning of the ditch was necessary due to rubbish falling into the ditch, soil or leaves that were washed in, but also due to sewer pipes from the fortifications.

In connection with the early and modern fortress construction, water-bearing Künetten are also known. These took on a further protective function in addition to the actual ditch and were designed in such a way that attackers could not easily wade through them. 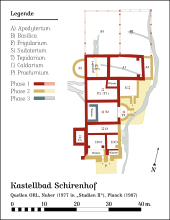 Ditches at a Roman bath down the slope

In order to increase the durability of their roads, the Romans planned water drainage ditches parallel and to the side of the routes. These absorbed the groundwater and rainwater. In other forms, too, in construction projects of all kinds, the use of drainage ditches was and is necessary, especially in climatically moderate areas. For example, for securing hillside properties, but also in mining . In addition, künetten have been excavated in the past for the water supply, water regulation and drainage. They can also secure water-bearing erosion channels in the terrain. The term is also applied to narrow trenches, such as those necessary for laying supply lines and other excavations .

Die Künen is also known from Wolfgang Ambros ' song in the Viennese dialect: De Kinettn wo i schlof (“The Künen, in which I sleep”).