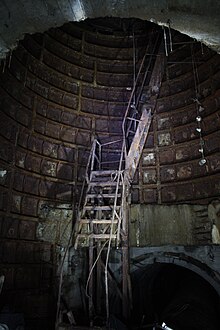 Tubbing of a shaft

The execution of deeper and deeper shafts required a type of shaft construction that combined static stability in pressurized mountains with the highest possible water tightness. Since the expansion through masonry that had prevailed up to then reached its limits in both points, the Küvelage was developed in the middle of the 19th century, made possible by the increased efficiency of the cast iron processing companies. A Küvellage consists of ring segments pre-cast in standardized sizes with cast-on webs and flanges to increase stability and simplify assembly, which was assembled and sealed on site to form complete rings. Due to the occurrence of cooling stresses during casting, the thickness of the segments could not be increased economically beyond a certain level, so if the demands on the stability of the expansion continued to grow, two kink layers were preferably placed one inside the other and the gap was filled with concrete .

The bottom is closed by single or double wedge rings built into a manhole widening, which are intended to ensure a tight water seal down to the rock. These wedge wreaths are piqued towards the mountains and usually poured with concrete.

The "English Küvelage", which is preferred in English mining, was characterized by lower prices for the segments, as the segments were only reworked to a very small extent after the casting. This price advantage was at least partially offset by increased labor costs during installation, since, in addition to more complex assembly, satisfactory tightness could only be achieved through complex picotizing. The English Küvelage has its webs and flanges on the outer side, ie facing the mountains; so shafts with an English basin layer appeared smooth on the inside.

The "German Küvelage" was priced higher than the English Küvelage, because after the casting a relatively complex reworking of the edges was carried out. However, this brought the advantage of reduced labor costs for installation and maintenance, since extensive sealing work was largely eliminated; A seal was normally made by inserting lead strips between the segments. The segments of the German Küvelage were usually made somewhat larger than those of the English Küvelage; however, the difference is not essential. Deutsche Küvelage carried their webs and flanges on the inside of the shaft, which not only simplified the assembly, but also the fastening of other internal shaft extensions. Shafts in a German basin position therefore do not appear smooth on the inside.

Neither of the two types of Küvellage could exclusively prevail due to the respective advantages and disadvantages.