The Kaiserplatz , 1947-1955 Friedrich-Ebert-Platz named, is one of the central squares in Frankfurt . 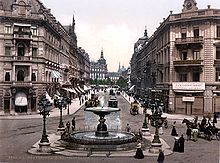 Kaiserplatz is located in the city ​​center at the confluence of Friedensstrasse, Kirchnerstrasse and Bethmannstrasse with Kaiserstrasse . There is a fountain in the center of the square. The square is surrounded by important buildings: to the west is the Junior House with its eye-catching staircase, to the north the Commerzbank Tower , which was Europe's tallest skyscraper until 2003, and to the south is the Steigenberger Hotel Frankfurter Hof .

About 200 meters to the northeast are other central squares such as the Roßmarkt , Goetheplatz and Rathenauplatz or the Hauptwache .

Kaiserplatz and Kaiserstraße were built in 1872 as a road breakthrough to create a connection between the train stations at the Taunusanlage and the city center. The White Deer , one of the largest properties in Frankfurt , was previously on the site . Between 1947 and 1955 the square was called Friedrich-Ebert-Platz .

In the center of the Kaiserplatz is the Kaiserplatzbrunnen or Kaiserbrunnen. It consists of a large well basin with a goblet-like well pillar with a bowl. The polished bowl, from which a fountain rises, is cut from a piece of porphyry .

The fountain is a foundation of the Frankfurt banker Raphael von Erlanger from 1876. Originally, the fountain was operated with unfiltered Main water, but this led to an unpleasant odor in the summer months. As part of the underground construction, the well had to be temporarily dismantled. It has been fed with tap water since its reconstruction in 1974 and has been odorless ever since.