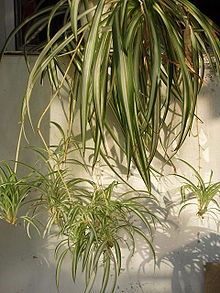 A kindel is a usually complete small plant that initially grows on the mother plant and is used for vegetative reproduction . Kindel's natural reproduction is a type of blastochoria . Kindel have at least one leaf, one stem axis and roots or at least roots. The differentiation from brood buds is difficult in individual cases, since in these cases the brood buds can develop into complete plants while still on the mother plant. Unlike Kindel, sinkers are not special parts of plants formed for vegetative propagation. Kindel can grow on flower sprouts or side shoots, depending on the type of plant. The side shoots are often designed as runners above or below ground , so that on the one hand the children grow at a minimum distance from the mother plant and on the other hand a larger area can be populated quickly from the mother plant. Short side shoots with children, on the other hand, serve for the rapid formation of dense stands. There is a certain risk of confusion between plants with subterranean runners and their children visible on the surface of the earth, on the one hand, and rhizome-forming plants with fresh shoots on the other, as both appearances are visually similar. When it comes to orchids , Kindel are sometimes referred to as Keiki ([ kei̯ki ], Hawaiian for baby).

If a child comes into contact with a suitable substrate, it continues to grow as an independent plant. The connection to the mother plant is interrupted physiologically at the latest as soon as the child has grown and is sufficiently caring for itself. Earlier times for the interruption are possible depending on the type of plant. After the physiological break in the connection, the connection itself usually dies. Physically, the connection can still exist for a longer period of time, depending on its nature and the ambient conditions.

Kindel allow a very simple and safe vegetative propagation of Kindel-forming plants. The failure rates are usually significantly lower than with propagation by cuttings or seeds. Reproduction by Kindel is widespread in the private sector. In the commercial sector, the achievable numbers are often too low, which is why the increase by Kindel is usually only used if no alternatives with higher achievable numbers are available or in addition to these. Some Kindel-forming plants, especially those which have become sterile through breeding and which cannot be propagated by cuttings, can only be propagated by Kindel.