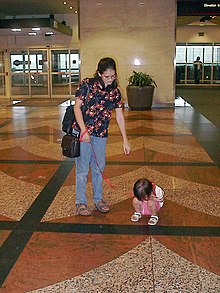 Child with harness and reins

A child safety belt , also known colloquially as a child's reins or leash , is a safety harness for children that is intended to ensure child safety in everyday life. Also Kinderlaufgurt or Kindergeschirr occur as names. It is a restraint system that is either connected to a child care item (e.g. high chair ) or used by means of retaining reins when the child is walking or learning to walk.

Typical manifestations are belts over the chest and shoulder with retaining reins attached in the middle or on the side, wrist reins, and backpacks with rear retaining reins.

In the European Union , child safety belts and reins must meet the standards and safety requirements of EN 13210: 2004. The standard is to be applied to belt and restraint systems for the restraint of children up to 4 years of age , in particular chest straps and wrist reins for fixing at attachment points of articles for small children and with removable retaining reins for use when walking. The standard does not apply to restraint systems that are an integral part of articles for infants and young children; intended for children with special needs; and which are to be used in motorized vehicles.

The standard relates to the general product safety of toys with regard to the mechanical and physical properties, sharp edges and protruding corners, small parts, and the migration of dangerous substances such as heavy metals or nickel.

The standard requires a minimum width of all straps and straps of 20 mm, defines the minimum adjustment ranges of shoulder and lap straps as well as wrist loops, depending on the suitability of the product for children from birth or from the age of 6 months . Maximum adjustment ranges are not specified for the straps, except for the retaining reins, which must not be longer than 1200 mm.

No adjustment device may show more slippage than 20 mm if it has been loaded 10 times with a tensile force of 100 N.

For the dynamic strength test, the chest strap type is pulled over a test body (test dummy), which consists of a sack (300 mm × 470 mm) and was filled with dry, compacted sand. The test body is hung on a frame. The hanging rein is simply hung in the frame with the wrist loops closed.

The dynamic test requires the dynamic test mass to be triggered 5 times in a time window of 5 minutes, each time with a fall of 300 mm. The belt including its seams, rivets and connecting elements must not be damaged afterwards and must continue to function as intended.

The belt must have permanent markings that refer to this standard and the year of publication (EN 13210: 2004), allow identification of the manufacturer or dealer and the product, as well as describe cleaning. Instructions must u. a. contain specific warnings about dangerous situations, indicate the intended age range of the child, contain instructions for dressing and fitting, indicate signs of wear and damage. They must contain the instruction not to leave a harnessed child unattended.

Further development of the standard

Proponents argue that a child safety belt gives a child more freedom of movement than holding them by the hand or in a stroller . Critics believe that children are led like animals (compare dog leash ).