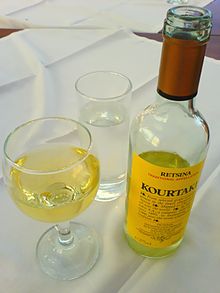 Greek Wine Cellars D. Kourtakis SA ( Greek Ελληνικά Κελλάρια Οίνων - Δ. Κουρτάκης ) is a Greek producer of wines (→ viticulture in Greece ), which includes the wineries Kourtaki and Calliga as well as the brands Apelia and Kouros . The company was formed after buying the Kefalonian winery Calliga by Kourtaki Wines in the 1990s. The company is based in Markopoulo in Attica .

The company was founded in 1895 by the first qualified Greek oenologist, Dr. Vassilis Kourtakis (1865–1946) founded as a small winery. This was initially limited to the production of the Retsina wine, which was particularly popular in Attica and was delivered to taverns across the country. It was only Dimitris Kourtakis, the founder's son, who began filling the bottles in 500 ml and 750 ml bottles. Today the company is run in the third generation by Vassilis Kourtakis (grandson of the founder).

In the 1960s and 1970s the company was the market leader in Greece with over 60 million bottles a year. Later the wines were separated into two product lines: Apelia for table wines and Kouros for quality wines from the islands of Crete, Samos and Santorini . After taking over the Calliga winery, Greek Wine Cellars was founded as an umbrella company.

The company has 250 permanent employees and has Kourtakis Deutschland GmbH and Kourtakis Japan LTD. two foreign branches. Around 30 million bottles of wine are produced annually, half of which is exported. It ships to 10,000 customers including J Sainsbury and Mercian Corporation. The Lufthansa goes on international flights Kourtakis wines.