Laska is a board game for two people invented by the German world chess champion Emanuel Lasker .

A plagiarism of the game was launched in the United States in 1919 under the name Stax . 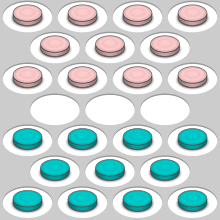 Laska is played on a board with 25 fields in 7 rows. The rows have alternating 4 and 3 fields. Each party has 11 flat pieces of the same type (white or black), which are placed on the first 3 rows at the beginning of the game. The middle row remains free for the time being.

The two players take turns taking turns. The pace of the stones is the same as in checkers: one space forward in a diagonal direction. Opposing stones can (and must) be skipped if they are diagonally in front of your own stone and the space behind is free. Multiple jumps are compulsory if possible, but it is not necessary to choose the move that skips most of the opponent's stones. If a stone reaches the opposing back row, it is promoted to officer, which is indicated by replacing the stone in question with a stone of a different color. Officers can move forward or backward, but also only one square at a time diagonally.

In contrast to the checkers game, the opponent's jumped stones are not removed from the board, but "enslaved", that is, placed under the jumping stone. In the course of the game, towers of different heights are created. They belong to the player who owns the color of the top piece. If a tower is skipped over, only its top stone is enslaved. The rest of the tower will stop and possibly change hands.

The aim of the game is to take all stones from the opponent or to make him unable to move.