Lexicon of all technology 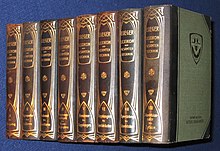 Lexicon of all technology , 2nd edition 1904

Article “Steam boiler” in the Lexicon of All Technology , 2nd edition 1904

The lexicon of the entire technology and its auxiliary sciences, originally published by the hydraulic engineering technician Otto Lueger , is an encyclopedic reference work on topics of technology that appeared in four editions.

Each of these editions reflects an era in German history in terms of selection and content: first the German Empire with all kinds of machines, but also mustard gas and ballistics , then the Weimar Republic with automobiles and film projectors , and finally the West German post-war period in the fourth edition, 1960 to 1972. This raised the comprehensive claim to exhaust all areas of technology in the broadest sense encyclopedically. From mining and reflection seismics to Heisenberg's uncertainty principle , from mechanical engineering to occupational safety - everything that moves an engineer or a technician has been incorporated into the plant.

There is also a paperback edition of the 4th edition, also named after Lueger, in 50 volumes, divided into subject areas. Part of it is, for example, the “Techniklexikon der Feinwerktechnik” in 6 volumes from 1972 with the content: office machines, measuring and control devices and systems, optics and optical devices, electrical communication devices.

The Lueger in book form is out of print in bookshops, the second edition is available on DVD .

Commons : Lexicon of all technology 1904  - collection of pictures, videos and audio files