Luis Korda in the studio in Havana, 1957 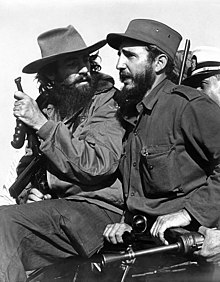 Born in Manzanillo as the son of a North American miner and a Jamaican mother, Luis Antonio Peirce Byers founded the company ›Korda Studios‹ in Havana in 1956 together with Alberto Díaz Gutiérrez. The company name was quickly borrowed from the well-known Hungarian-British film directors Alexander and Zoltan Korda and was eventually used for the artist names for both photographers: Luis became Korda the Elder (Luis Korda) and Alberto became Korda the Younger ( Alberto Korda ). The services of the new company ranged from fashion and classic advertising photography, for example for record labels, insurance companies, the pharmaceutical industry, advertising photos for Bacardi and Hatuey, car sales companies, etc. to photo reports, for example about Cuba's most famous car race, the Carrera from Oinar del Rio via Sagua la Grande to Havana. Before October 1956, the two photographers moved their studio to Apartment No. 2 on the first floor of a building opposite the Hotel Capri, which was just under construction, in Calle 21 (No. 15, entre N y O) in Vedado and changed a few weeks later the name of the company in Studios Korda .

The Korda studio community did not differentiate between the individual authors in terms of their commissions or documentation, a characteristic that is also illustrated by the neutral, repeatedly changing studio stamp on the back of the paper prints. Luis was an excellent photographer and, above all, very technically skilled. However, he was less of a businessman and therefore did not go to great lengths to get business. It can be assumed that his share of photographic works is slightly lower than that of his partner Alberto. Alberto Díaz photographed primarily as a companion and travel companion of Fidel Castro , with whom he had a special relationship, but also Ernesto 'Che' Guevara , whom he basically considered quite arrogant - a personal assessment that he shared with many photographers.

The best-known photo of Luis Korda is also the most important photo of the Cuban revolution and depicts the entry of the revolutionaries into Havana on January 8, 1959, with Fidel Castro and Camilo Cienfuegos at their head.

Concerned that the privately run company Studios Korda could fall victim to nationalization, Alberto Díaz and Luis Peirce transferred all negatives related to the revolution to the ›Oficina de Asuntos in November 1966 in the form of a death gift Historicos ‹, which was then headed by Celia Sánchez . Nevertheless, two years later, and in the absence of the two Kordas, in the course of one of the last nationalization actions, the company was officially closed on March 14, 1968, the image material was confiscated as a cultural asset and brought to the aforementioned archive. Most of the advertising and fashion photographs by Alberto, Luis and Genovevo Vasquez, who joined them later, were lost, and with them a very important and hitherto poorly understood chapter of Cuban photographic history.