Alberto Díaz Gutiérrez began his career in 1956 as an advertising and fashion photographer in Havana with his own studio , which was already known at the time of President Batista . There he founded the company Korda Studios with his friend Luis Antonio Peirce Byers (1912–1985) from Manzanillo . The company name was quickly borrowed from the well-known Hungarian-British film directors Alexander and Zoltan Korda and was ultimately also used for the stage names for both photographers: Luis became Korda the Elder ( Luis Korda ) and Alberto zu Korda (Alberto Korda) the Younger.

From 1959 to 1968 Alberto Díaz was a photographer of the Cuban revolutionary elite, such as Fidel Castro , Ernesto "Che" Guevara and Camilo Cienfuegos , with whom he was also friends. 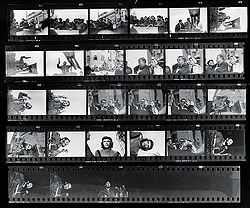 Once loaded with weapons and ammunition Belgian freighter on March 4, 1960 "La Coubre" exploded in the harbor of Havana , found the next day under the participation of 150,000 people, including Simone de Beauvoir and Jean-Paul Sartre , on the cemetery Cristóbal Colón the Funeral service for the "supporters of the revolution" killed in the process. During Castro's funeral speech, Díaz created one of the best-known media icons of the twentieth century "by chance" : the portrait of the guerrillero Heroico (the heroic resistance fighter ) Che Guevara , who was only present for a short time.

Since no newspaper wanted the picture, the photographer gave it to the Italian publisher Giangiacomo Feltrinelli . It was published after Guevara's murder in 1967, and it promptly became an icon of popular culture and a symbol of the 1968 movement , a widely adapted work of art and, finally, the logo of the advertising industry. Particularly well-known is a picture created by Gerard Malanga in the style of Andy Warhol's Marilyn , which he sold as "Original Warhol" - Warhol later recognized it as "his" work and earned the income from further marketing - for example as a poster.

Alberto Díaz himself did not receive any money for the decades of marketing his famous photo. It wasn't until the vodka maker Smirnoff advertised it in 2000 that he sued and received USD 50,000 in damages , which he donated to Cuban children.