The original picture by Alberto Korda, 1960 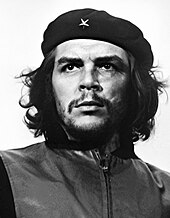 The picture Guerrillero Heroico ("heroic guerrilla fighter ") shows the revolutionary Che Guevara in a pensive pose with a beret on his head and has been called "the most famous photography in the world and symbol of the 20th century" by the Maryland Institute of Art. The original version is a photo of Alberto Korda , the March 5, 1960 in Havana ( Cuba was included).

The communist Italian publisher Giangiacomo Feltrinelli brought the picture with him from Cuba and was the first to distribute it in Europe. Feltrinelli received the reproduction rights to the photo from Korda, who waived any royalties. Illustrators at the Milan-based Feltrinelli publishing house then worked on Korda's original image by stretching it up by a sixth. This made Che Guevara's face, which was puffy from taking cortisone due to his asthma , appear narrower.