The title of this article is ambiguous. For the film director of the same name, see Natalia Smirnoff . 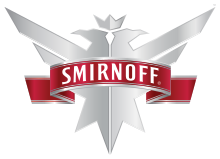 Smirnoff (originally Smirnov ) was in 1886 Moscow , founded vodka - distillery and is now a brand of British spirits manufacturer Diageo .

The Smirnoff vodka distillery was founded by Pyotr Arsenjewitsch Smirnov in Moscow in 1886 and was the first distillery in the world to use charcoal for filtering.

Vladimir Smirnov took over the company in 1910 after the death of his father Pyotr Smirnow. During the October Revolution , the distillery was confiscated and the family had to flee to Constantinople , where Vladimir built a new distillery. Four years later the family moved to Lemberg ; In 1925 a second distillery was opened in Paris , the Latin spelling of the name was changed to Smirnoff . In the late 1930s, the vodka was exported to most European countries.

In 1934 Vladimir Smirnov sold the company to Rudolph Kunett, who relocated the company headquarters to the USA .

In the 2014 Formula 1 season , Smirnoff sponsored the Force India team.

In addition to pure vodka, Diageo also sells the vodka-based Alcopop drink Smirnoff Ice with lemon . There are also other Smirnoff products, such as flavored vodkas with vanilla , raspberry , orange , blueberry , green apple and lemon as well as “Smirnoff Mule” ( beer ) and cherry .

Pure vodka is sold under various brands, e.g. B. triple distilled as Smirnoff Red Label, offered. The most expensive brand is Smirnoff Penka, which consists of the 'middle cut', has an alcohol content of 40 % by volume and is sold in 0.7-liter bottles.

There is also the Smirnoff Blue Label vodka , which has been distilled three times and filtered ten times through charcoal and with 50% by volume. is the company's most alcoholic vodka. Smirnoff Black Label is another variant with an alcohol content of 40% by volume, which is obtained through the Copper Pot Still distillation . 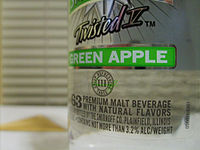 Every Smirnoff vodka has its own identification number , which is indicated on the label: