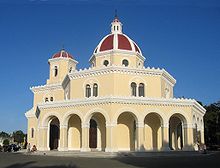 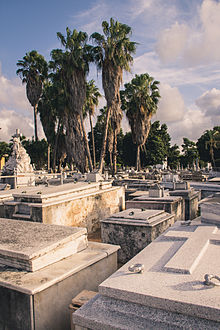 The Cementerio Cristóbal Colón (Eng. " Christopher Columbus Cemetery ") is a Catholic cemetery in Havana with an area of ​​about 56 hectares and about one million burials. In total there are over 53,000 family tombs, mausoleums , galleries and funerary chapels in the "City of the Dead". More than a million people were buried, including three times more poor than rich, yet the graves of the wealthy occupy 98 percent of the total area. The road network of the cemetery is about twenty kilometers - streets are labeled with letters and numbers and maps are essential for locating graves.

For the Cuban residents, the cemetery is not only a memorial and burial site, but also a place of pilgrimage. Together with the Saint Louis Cemetery in New Orleans, it is considered the most beautiful necropolis in the New World and is also popular with tourists. The Cementerio Cristóbal Colón has been a Cuban national monument since 1987 and is therefore a listed building .

The first European residents of Havana were initially buried in city churches. But when the population had grown to 80,000 at the end of the 18th century, Bishop Espada decided to build a central cemetery, which was completed on February 2, 1806. The cemetery allowed the burial of 3,000 dead annually - after less than 50 years, however, with 314,244 dead, its capacity was exhausted and had to be closed.

A royal decree of July 28, 1866 therefore established a new necropolis, the "Cementerio de Colón". Farmland far west outside the city was bought for 40,867 pesos - today the area is part of the Vedado district . "The pale death occurs equally in the huts of the poor and in the palaces of the kings." Was the title of the proposal with which the young Spanish architect Calixto de Loira was able to prevail in the tender for the design of the cemetery. He had lived in Havana since he was six. After his untimely death, Eugenio Rayneri Sorrentino took over the management of the construction project. The foundation stone was officially laid on October 30, 1871 at the point where the main gate is today. A year later the cemetery was opened, but the construction work continued until 1886.

Although a showplace for the rich dead, it was a 55-year-old African slave who was the first to be buried in the new area. Even before the official opening, María Balido was buried in November 1868.

The central chapel, La Capilla Central , was officially opened in 1886 and was originally intended to house the remains of Christopher Columbus .

The approximately 56 hectare site is designed strictly symmetrical, similar to a Roman military camp. The 830 meter long and 630 meter wide rectangle is divided into four main parts by a symbolic cross. The central square in the middle is also the location of the only chapel in the cemetery. The geometric division is also a division according to social class: the magnificent graves are mostly in the northern part and along the main avenues, while mass graves and simple marble slabs can be found in the southeast. Remote areas were often reserved for non-Catholics and epidemic victims. Until 1924 the “negros y mestizos”, the blacks and mixed race , were entered in separate death registers. They were also allocated peripheral spaces on the site. 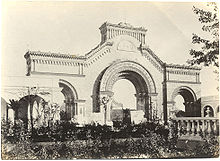 "Gate of Peace" still without statues around 1900

"I am the gate of peace" - JANUA SUM PACIS is written at the main entrance to the cemetery, the Portada Principal . The gate with the three Romanesque-Byzantine arches is 34 meters wide and almost 22 meters high. The original plans came from Loira, but his successor Rayneri made some changes, including reducing the size of the building.

It took eight years to build and the white marble came from Carrara, Italy . The three figures represent the Christian virtues , hope , faith and love and were only put on the gate in 1901.

The underground Galería de Tobías is modeled on Roman catacombs . The architect of the Loira Cemetery was the first to be buried here after his untimely death in 1872. The 100 meter long gallery with 562 rock niches houses over ten thousand numbered stone boxes with mortal remains, as it is now used as an ossuary .

The Mausoleo de los Bomberos commemorates the 28 men who died fighting a great fire in Havana on May 17, 1890, and is the tallest building in the cemetery. Work on the mausoleum began on December 19, 1892. The burial of the firemen took place on the day of the inauguration, July 22, 1897. This event was of such importance that the governor-general of the island Valeriano Weyler attended the inauguration.

Although Havana still has around 20 other cemeteries, almost 80 percent of the dead are buried in the Cementerio Cristóbal Colón. 40 to 50 burials a day mean that the cemetery grows by 20,000 people annually.

Amelia Goyri, better known as La Milagrosa , the miracle worker is considered to be the protector of sick children and of sterile and suffering mothers . Amelia came from a wealthy family and died on May 3, 1901 at the age of 23 from complications of a stillbirth . In the eighth month of pregnancy, she was diagnosed with the fact that the unborn daughter had probably died in the womb of eclampsia . To save Amelia, the child was removed during an operation. But she did not survive the operation and died.

According to legend, she was buried with her unborn child at her feet. The two bodies were found when the coffin was opened on December 3, 1914, with no signs of decay . The child was no longer at her feet, but lay in the mother's left arm. The widower José Vincente, a captain in the Liberation Army , visited the grave every day until his death in 1941 and announced himself by knocking the brass ring on the tombstone. He laid fresh flowers on the grave and always walked backwards without turning his back on his wife. This ritual is continued by the pilgrims who come to the grave of Milagrosa and pray for their wishes to be fulfilled. Because of the pilgrimage , her grave is the most visited of the Cementerio de Colón. 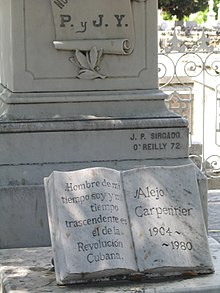 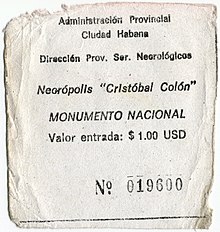 Tourist ticket from 2003; Visits to the graves of relatives are free for foreigners as well