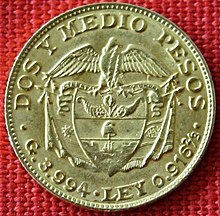 2.5 pesos gold coin from 1919, minted in fine weight like the British pound

The Colombian peso (Spanish: Peso Colombiano , ISO code: COP ) has been the currency of Colombia since 1837 and replaced the old real . It is issued by the Banco de la República and is unofficially abbreviated as COL $. However, the official peso symbol is $.

In the period before independence and also during the wars of independence, a large number of coins made of gold and silver were in circulation. Gold coins were dominant as gold was easily available as a commodity in the region. After independence in 1810/1819, the different means of payment were recognized as a disadvantage, but it was not until 1838 that Congress decided to collect all coins that were still in circulation from the colonial era. At the same time, the Tesorería ( Mint ) decided to replace the higher quality coins with banknotes , which led to the first major currency issue in Colombia. However, there was no uniform issuing policy, so that different types of coins and banknotes were soon in circulation again. The diversity was increased by foreign money admitted domestically, also due to the insufficient quantity. At the same time, the decimal system with the calculation of pieces and hundredths established itself and was finally introduced after 1874.

From 1886 onwards, inflationary tendencies became apparent due to the increased use of the printing press; in 1907 the value of the peso had sunk so much that it corresponded to the centavo of earlier years. The currency was stabilized again from 1918 onwards, and since then a more valuable development has been observed.

The renewed inflation in the last decades of the 20th century led to an increase in the number of digits before the decimal point. The Centavo is largely unknown to the younger generations. From November 10, 2003, the Colombian peso (COP) was supplemented by the Unidad de Valor real (COU). The inflation rate was around three percent in 2012.

From 2003 the Colombian peso has recovered, despite foreign currency purchases by the state. This phase lasted until 2012 with some fluctuations. Since then the currency has fallen again against the US dollar and the euro . The main reason was the drop in the price of oil from around 2014. Historically, the Colombian peso reached an all-time high against the dollar of COP 3453.90 in February 2016 and a record low of COP 689.21 in August 1992. At the turn of 2017/18, you had to pay 2,800 pesos per US dollar. The much stronger euro was around 3500 pesos.

Since 1992, the banknotes have been designed by Colombian artists, who are guided by the improved security features of the notes and a selected topic. The whole development from start to issue takes an average of one year. New from 2016 is the issue of a 100,000 peso note, the thousands no longer exist. It was replaced by a coin.